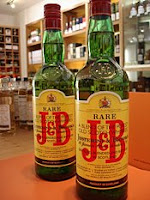 J&B Rare is the second best selling blended whisky in the world. It lies behind the Johnnie Walker Red Label by some distance but still accounts for around 6% of all worldwide whisky sales. It is a complex blend of 42 different whiskies, primarily single malts from the Speyside region of Scotland and premium grain whiskies. The whiskies are of differing ages and the Rare blend was created in the 1930s for the American market that was craving top quality whisky following years of Prohibition. The USA remains one of the top markets for J&B Rare and its is also popular in south east Asia and southern Europe - especially Spain (which is the top market in the world), France and Portugal.

J&B is named after the company Justerini & Brooks. Giancomo Justerini, from Bologna in Italy, came over to London in 1749 and set up a wine shop and importing business with a business partner called George Johnson. Justerini returned to Italy in 1760 and Johnson continued to run the business under Justerini's name. In 1831, Johnson's grandson sold up to Alfred Brooks, who kept the name while adding his - so Justerini & Brooks Ltd was born. Brooks pioneered the idea of buying Scottish whisky and blending it outside of Scotland, making Justerini & Brooks the first London based spirits firm to create their own blend in the late 19th century. This was called J&B Club. Justerini & Brooks have been issued with consecutive Royal Warrants by the last nine reigning monarchs, starting with George III who issued the first one to Giancomo Justurini himself. They remain as one of the Royal households top wine and spirits suppliers. The J&B Rare brand is currently owned by drinks company Diageo.

The colour is pale lemon yellow and the nose is light yet fragrant. There is an initial yeasty/malty element that is then joined by fresh green fruit (imagine pears and apples), vanilla and honey. These disappear quite quickly after pouring to reveal a more sugary caramel note. On the palate this is light and fresh with a sugary sweetness (think of icing sugar) hitting straight away. This fades to give a pleasant mix of vanilla, honey (imagine a runny honey like acacia), some citrus (think of lemon juice) and some woody spice (like cinnamon). A nuttiness comes through right at the end (reminding us of almonds). The finish is light, basic and very short (borderline non existent!), although the sweetness is replaced with a drying woodiness and your throat is left with a stinging hot sensation from the alcohol.

J&B Rare is a basic, light and refreshing whisky that cleanses your palate. For this reason, it is easy to see why it is popular in warm climates. The strong initial elements on the nose and palate make it ideal for mixing or cocktails (which is the area of the market that it is primarily marketed at), although it would also be good with a couple of ice cubes on a boiling hot day. It is hard to believe that there are 42 whiskies blended together in this but the blending has been done with subtlety and this represents good value at £15-20 a bottle.
posted by Matt C at 1:31 PM

Does anyone know where I can sell a couple of bottles of rare Hiram Walker " Carleton Tower" whisky? This blended whisky was bottled in 1947 from rare reserves from the 1920s and 1930s. One bottle is in the original box and felt bag.

Dear Anonymous
If you are in the UK then try McTear's Auctioneers or The Whisky Exchange. They are the only two that I know of.
Regards, Matt

I have a 1955 Bottle of Carleton Tower bottled by Hiram Walker and Sons. It is unopened. The seal is partially torn. If you'd like more details, please let me know.