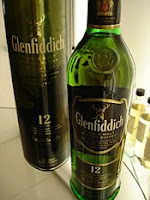 Glenfiddich is the most famous whisky distillery and single malt brand in the world. The distillery is located in Glen Fiddich, a valley on the outskirts of the town of Dufftown in the Speyside region of Scotland. The name means 'valley of the deer' in Gaelic - this reference explains the origin of Glenfiddich's famous stag logo. Glenfiddich was founded in 1886, with production starting in 1887, by William Grant and his family. The Grant family maintain ownership today and the success of their whiskies have made Glenfiddich the biggest distillery in Scotland. The annual production is a massive 10 million litres with 29 stills and 45 maturation warehouses, its own cooperage and bottling plant (very few distilleries have these facilities remaining).

Glenfiddich was the modern day pioneer of single malt whisky. They were the first distillery to consistently bring single malts to the international market in the early 1960s. They were also the first single malt to be sold in a travel retail shop at an airport in 1963, the first to open a visitor centre to the public in 1969 and the first single malt to sell over 500,000 cases of whisky in a calendar year. Following these early successes, other distilleries followed their strategies but Glenfiddich had already taken huge steps towards cornering the market. It can be argued that without this innovation in the 1960s, the modern single malt market would not be what it is. Now, Glenfiddich is sold in nearly 200 countries and accounts for nearly 35% of all single malt sales in the world!

The core range is extensive with different age statements joined by limited editions and duty free retail exclusives. This 12 years old forms the cornerstone of Glenfiddich's worldwide success and domination, being the most purchased single malt whisky around the globe. The colour is golden and it has a fresh, appealing nose. There is lots of vanilla and that is joined by some cooked fruit (imagine pears and apples). It reminded me of an apple Danish pastry. Underneath is an oaky warmth and something nutty (think of coconut especially). On the palate this 12 years old is light and refreshing with an initial hit of sugary sweetness (imagine honey), followed by crisp juicy fresh green fruit (apples especially this time) and vanilla. The finish is pleasant and fairly long with some spiciness (think of nutmeg and cinnamon) and slightly bitter woody oakiness.

This Glenfiddich 12 years old is a pretty simple whisky but is very good, refreshing and easy drinking. It is easy to see why it has such a broad appeal around the world as it is very balanced, has a nice level of sweetness and is reasonably priced (a bottle can be found in most shops everywhere for £20-30). Despite its huge sales figures, it remains under rated within the whisky world. It almost becomes a victim of this success, as people think that it is mass produced and therefore of lower quality. However, as with anything that sells massive amounts in any retail field, its quality is what has got it to that position in the first place. If this whisky were made by a smaller cult distillery then I am certain that people would rave about this single malt.
posted by Matt C at 4:20 PM

A colleague introduced me to a sublime drink with Glenfiddich, albeit a decadent/expensive one.

I lost a good friend to GlenFiddich. Liver transplant didn't take. Next shot of Glenfiddich, raise your glass to Alan Jones, hell of a pianist, and a young one at that.

Cheers for the tip Doctor. Whats this cocktail called?

Cheers for the tip Doctor. Whats this cocktail called?