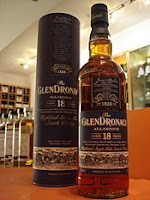 Glendronach is a distillery that is located in the south eastern tip of the Speyside region of Scotland, close to the town of Huntly. It was founded in 1826 and later became part of the William Teacher & Sons empire, with most of the whisky being used for the popular Teacher's blended range. Glendronach has also been owned by other large companies during its history, most notably Allied Domecq and Pernod Ricard. The distillery is relatively small with an annual capacity of 1.4 million litres. Glendronach was also the last distillery to use coal to heat its stills. The use of this traditional method died when their stills were converted to steam heating in 2005.

Glendronach has been recently reborn following a period of closure. During 2008, the distillery was taken over by The Benriach Distillery Company Ltd who are the independent owners of another Speyside distillery (Benriach, unsurprisingly!). The decision was immediately taken to expand the range of Glendronach whisky that previously contained just a 12 years old and a limited edition 33 years old. They have added a 15 and this 18 years old to fill the large gap in the range and these were released in the UK about two months ago. The plan is to increase the popularity and availability of Glendronach whisky and the claim is that a 'sleeping giant is back!'

This 18 years old has been exclusively matured in Oloroso sherry casks and the influence can be seen in the colour, which is dark amber with a brown/red tinge. This is sweet and malty on the nose with a lot of sherry cask influence - dried fruitiness (think of sultanas and peel especially), sweet malted barley, warm spices (imagine nutmeg and cinnamon) and some woodiness. Many people describe these characteristics as reminding them of fruit or Christmas cake and that is a classic sign of sherry cask maturatation. The palate was thinner than the richness of the nose suggests. The dried fruit and malted barley combined well to give a pleasant whisky that has a decent level of sweetness. Other elements present include some sugary caramel, those warm spices again and a distinct nuttiness (think of walnuts) that gives a slight bitterness to balance the other sweetness. The finish is quite short, woody, dry and slightly bitter with some candied peel coming through (orange especially).

This is a good whisky and a decent example of sherry cask maturation. The age gives extra complexity that can be lacking in younger whiskies. It is currently only available in the UK and can be found in specialist whisky retailers for around £50-55 a bottle. Only time will tell us if that giant has woken up!
posted by Matt C at 1:36 PM