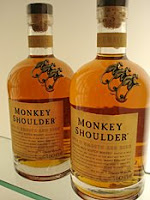 Monkey Shoulder is a vatted whisky from William Grant & Sons. A vatted whisky is one that contains only single malts, compared to a blend which contains grain whisky as well. Monkey Shoulder contains whisky from each of Grant's three Speyside distilleries - Glenfiddich, Balvenie and Kininvie. The three monkeys on the bottle represent these three distilleries. Whilst Glenfiddich and Balvenie are both world famous, few have heard of or know much about Kininvie as they do not release any whisky under the distillery name. Kininvie was built in the early 1990s next door to Balvenie, with the function of producing whisky to be used in the popular Grant's blended whisky range. The idea being that this would then free up more Glenfiddich and Balvenie to be released as single malts, in order to meet demand. Kininvie is now the major contributing whisky to Monkey Shoulder.

The term 'Monkey Shoulder' refers to an affliction that used to strike down distillery workers in the past. Balvenie is one of the few remaining distilleries to have its own malting floor and here the barley is left for a number of days to germinate, turning the starch in the barley to sugar which in turn gets turned into alcohol in the mashing process. To ensure an even germination, the barley has to be turned regularly by hand and the repetition of doing this over many years led the distillery workers to develop a 'Monkey Shoulder' (a historical version of repetitive strain injury!).

The colour is golden amber and the nose is light with vanilla, honey, some crisp fresh fruit (think of pears) and a hint of spice (imagine nutmeg) all present. These elements are carried through to the palate, where they blend really well together. It feels creamy and buttery in your mouth with heaps of vanilla being joined by a lovely malted barley sweetness flavours. There is some oaky woodiness, some honey and a hint of citrus (orange especially) combining also. The finish is fairly long, smooth and creamy again with the vanilla and warm spice (nutmeg again) coming to the fore. This is an extremely enjoyable and easy drinking whisky and certainly one of the best blended or vatted whiskies that we have tried to date. It is a cross between the richer, sweeter Balvenie style and the lighter, fresher Glenfiddich.

Monkey Shoulder has been designed and is marketed at the younger whisky drinker and the bar trade, who are encouraged to drink it with a mixer or as part of a cocktail. A bottle should cost you between £20-25. The website is also very good (www.monkeyshoulder.com) and if you try the whisky and like it, then you can even join the Monkey Shoulder Appreciation Society there!
posted by Matt C at 10:44 PM