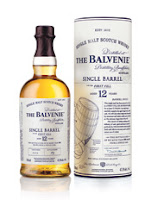 News of a new Balvenie release always gets the whisky blogosphere and consumers excited, and the news of this latest expression is no different.  The Balvenie Single Barrel 12 years old has just hit the shelves in the UK market and will sit alongside the popular core range of Balvenie single malts. A series of single first fill ex-bourbon casks have been hand selected by Balvenie's legendary Malt Master David Stewart for this release, and each cask will be bottled one at a time.

The term 'first fill' refers to the fact that the casks have matured Scotch whisky for the first time, after previously being used to mature bourbon in the USA.  These casks are made from American white oak (Quercus Alba in Latin) and the size of the casks means that there will never be more than 300 bottles from any one cask.  Each bottle is hand numbered and will retail for £45-50.  The sample that we have reviewed below is taken from bottle #248 of the first cask to land on British shelves via The Whisky Shop chain (cask #12742 for those interested) and is bottled at 47.8% ABV.

The Balvenie distillery is located in the town of Dufftown, which is in the famous Speyside whisky region of Scotland. It was founded in 1892 by William Grant and is the sister distillery to Glenfiddich, which it is built next to. Balvenie remains owned by William Grant & Sons today and has a current annual production capacity of 5.6 million litres. It is regarded as one of the most traditional distilleries in Scotland, as all stages of the whisky making process happen on site in one form or another - this includes growing barley, malting, mashing, fermentation, distillation, coopering and maturation.

Last year we were lucky enough to visit Balvenie, so for more information on the distillery please read our Distillery Visit post.

Our tasting notes
The colour is a pale golden yellow and the nose is fragrant, fresh and vibrant.  There is an immediate hit of sweet malty cereals and plenty of vanilla and honey-like aromas.  These are backed up by increasingly influential notes of freshly sawn oak, coconut and expressive wood spices (think of cinnamon bark and baking spice in particular).  A late fruity note also develops - imagine dried sultanas and a hint of peach.

On the palate this feels initially light and delicate, almost fragile, and is again fresh and vibrant.  As before it is the sweet malty cereal note (imagine barley sugar or a sweet malty biscuit) that leads the way.  This is quickly joined by delicious notes of honey, vanilla and creamy coconut.  There is a tangy quality to the whisky also, which is reminiscent of very sweet dried sultanas and lemon zest.  This zesty characteristic seems to increase with time, before fading.  The final notes to come through are those of the drying wood spices adding a warmth, depth and complexity to the whisky (think again of fresh oak, wood shavings and cinnamon bark).

The finish is driven by a combination of the sweet notes (in particular the honey and vanilla) and the ever increasing wood spices.  The dryness that these create balances the sweeter elements and leaves the mouth watering and wanting another sip.  A tiny late hit of lemon finishes everything off nicely.

What's the verdict?
The Balvenie Single Barrel 12 years old is a wonderful addition to the range.  Balvenie is more known for its richer, sweeter and fuller style of single malt, but this offers something different and broadens the appeal of the distillery further.  Fans of the bigger, richer whiskies in the range may struggle a bit with this new expression, but it shows the alternative side to Balvenie's character.

This whisky shows Balvenie in a more delicate and subtle light, while also demonstrating how good a whisky can be with sympathetic use of good quality American oak ex-bourbon casks.  We are being spoilt with some excellent new releases this year already, and we are only at the beginning of March. The standard is very high and competition between brands seems keen.  2013 is shaping up to be a vintage year for whisky ...

Have just opened one of these. I am a long term Balvenie fan but this is one of the smoothest whiskeys I have ever tasted.