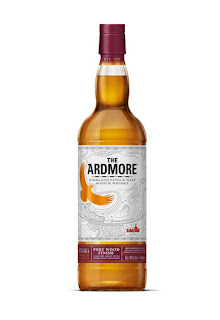 Ardmore - Last Port of call
The east Highland distillery of Ardmore has announced its latest whisky for its core single malt range - the PortWood Finish.  The whisky is made in the distillery's traditional mid-peated style before being aged in ex-bourbon casks for 12 years and finished in ex-Port half pipes.  The release completes the Ardmore portfolio which comprises the Legacy and the travel retail exclusives Tradition and Triple Wood.  The PortWood Finish is bottled at 46% ABV and has a recommended price of £50. 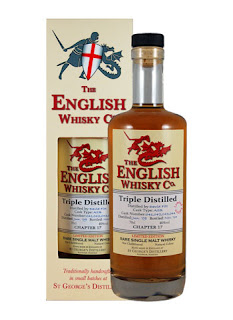 English Whisky Co - Heaven 17
The English Whisky Company have announced the latest addition to their increasingly popular Chapters range - the Chapter 17.  This is a significant milestone for the company as it is the first ever triple distilled single malt to be produced and released by their St. George's distillery, which is based in Norfolk.  It is also the first English whisky to be triple distilled in the modern era.  The release is limited to just 900 bottles and the price will be £50 per bottle.  Chapter 17 can be purchased via www.englishwhisky.co.uk and further information can be found there too.

Andrew Nelstrop, owner of the English Whisky Co, stated: "We wanted to try triple distillation to see how different it would be from our double distillation whiskies.  The result has been a lighter, more delicate whisky".

Spirit of Speyside - Extra dates added
The popular Spirit of Speyside Festival, which has been running annually over the May Day bank holiday weekend for the last 17 years, has announced that they are to add a further weekend of activity from next year.   The May festival attracts an increasing number of whisky fans from around the globe and unites the 40+ distilleries across the region, which are owned by a variety of companies.  The second weekend will be held in September and be based in Elgin.  The first dates will be September 9-11 2016 - more details can be found via www.spiritofspeyside.com, as can tickets for a variety of planned events closer to the time.

James Campbell, SoS Festival Chairman, said: “We look forward to developing our plans and helping keep one of Scotland’s most famous whisky producing regions well and truly on the map, inspiring more visitors to develop their interest and knowledge of our national tipple.” 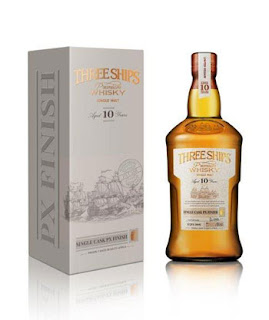 Three Ships - Starts finishing
The James Sedgwick distillery in South Africa has announced the launch of a new series of single cask whiskies and the first bottling in the series.  The Masters Collection will appear under the Three Ships label and will feature a series of single cask releases hand selected by Master Distiller Andy Watts.  The first release is the 10 years old PX Finish, which was distilled in 2005 before being matured for eight years and ten months in American oak casks and finished in ex-Pedro Ximinez sherry casks for 14 months.

The Three Ships 10 years old PX Finish is bottled at 46.2% ABV, is non chill filtered and of natural colour.  There are just 800 bottles and they will be available through various specialist whisky retailers in South Africa.  The price will be R850 (about £42).  For more information on the series, please visit www.themasterscollection.co.za.

Cavalry Bourbon bottles more than just fine spirits. It bottles the spirit of unity itself, from an era when sharing a good drink was a symbol of fraternity.
Bourbon whiskey
Branded bourbon whiskey