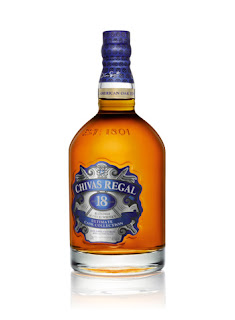 This whisky is the first in a new series of the popular Chivas Regal blended Scotch whisky that is to be exclusive to the global travel retail sector.  The Ultimate Cask Collection will be a set of three whiskies that aim to reinterpret the classic Chivas 18 years old expression. To achieve this the Chivas Regal 18 years old will undergo a different cask finish. The first release is the First Fill American Oak Finish, which has seen the whisky maturing in these casks for around six months.  Further bottlings are planned over the next two years.  The series will be presented in a robust and luxurious blue and gold embossed box.

The Chivas Brothers company was set up in the early 1800s by James and John Chivas. They owned a luxury grocery store in Aberdeen that imported products such as brandy, rum, port, spices, tea and coffee. They began blending their own whiskies, as was the trend at the time, and Chivas Brothers' whiskies became so popular in late Victorian times that Queen Victoria issued them with a Royal Warrant.  The name of Chivas Regal was born as a result. Chivas Brothers and the Chivas Regal brand is currently owned by drinks company Pernod Ricard, who purchased it in 2001, and they have helped to grow the stature and sales of the whisky around the world to the point that is is now one of the leading Scotch whisky brands.

“For the first edition of the Ultimate Cask Collection we wanted to create a unique blend that accentuates the most iconic notes of Chivas Regal 18 year old.”
Colin Scott - Chivas Regal Master Blender.


The Chivas Regal 18 years old Ultimate Cask Collection First Fill American Oak Finish (surely the longest named new release of the year) is bottled at 48% ABV and is non chill-filtered. The price is £85, €115 or $125US for a one litre bottle.  The world launch was held in London and was highly innovative - read about it in my article on the Huffington Post.

Our tasting notes
The colour is golden yellow and the nose has a lovely sweetness to it.  The initial aromas are of caramel, vanilla, raisins and candied orange peel.  These are backed up by hints of coffee and chocolate, plus woody spices (think of cinnamon especially) and a background whiff of earthy peat smoke.

On the palate this feels soft and gentle, almost velvety.  As with the nose, the first notes to come through are the caramel and vanilla.  These contribute to the feeling of softness.  The caramel becomes more reminiscent of butterscotch as time goes and is joined by some juicy dark dried fruits (think of raisins and sultanas).  The candied orange is also increasingly present and adds a pleasant bittersweetness.  Then comes a wave of oak spices and gentle peat smoke that gives further depth and complexity, while complimenting the predominant characteristics.  These presents themselves in the form of ginger, cinnamon, damp earth and hints of sawdust and milk chocolate.

The finish is long and sweet, especially once the woody spices and soft peat fades, and is dominated by the caramel, dried fruits and vanilla notes.  These mix superbly to prolong the velvety feeling and sweet flavours.

What's the verdict?
This new Chivas Regal is a delicious whisky that is rich, sweet, full bodied, easy drinking and enjoyable.  However it has an additional depth thanks to the warming wood spices and background smoke.  Fans of the regular 18 years old expression should enjoy this, along with new consumers discovering the brand for the first time while travelling through an airport.  It will be interesting to see what the other two finishes in the series but this First Fill American Oak Finish is a great start to the new series.