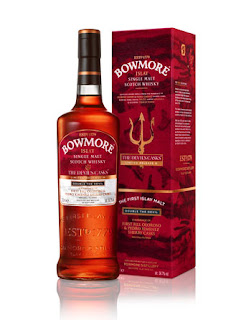 Bowmore - The Devil returns (again)
Bowmore, the oldest single malt distillery on Islay, has announced the third and final bottling of one of its most popular limited edition releases ever - The Devil's Casks.  The series, which was first released in 2013, has won many plaudits and this third bottling takes it in a slightly different direction.  The Devil's Casks III has been matured in two types of first fill ex-sherry casks (Oloroso and Pedro Ximinez) in the legendary No.1 Vaults at the Islay distillery.

The maturation is for an undisclosed number of years, hence the nickname 'Double The Devil', before being bottled at the natural cask strength of 56.7% ABV.  The total number of bottles has not been disclosed but it will be available through specialist whisky and luxury retailers from the end of October.  A bottle will cost £190.  For more information, please visit www.bowmore.com. 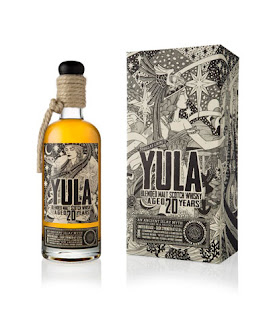 Douglas Laing
Independent bottlers Douglas Laing & Co have announced a new trilogy of whiskies, plus the first expression in the series.  The Yula Series will be a collection of blended malts celebrating the company's portfolio of island malts and the first chapter is released at 20 years of age.  The series is named after Yula, the tragic Norse goddess who is said to have searched for love with an apron full of stones.  These stones are said to have fallen out during her fruitless quest and formed the inner Hebrides of which Islay was the last stone.

There are to be just 900 bottles of Yula 20 years old First Chapter and the trilogy will see the same whisky evolving over the coming years.  It has been bottled at the natural cask strength of 52.6% ABV and will cost £115 a bottle.  Yula will be available from selected specialist whisky retailers from the end of October.  For further details, please visit www.douglaslaing.com.

Cara Laing, Douglas Laing’s Director of Whisky, commented: “This exciting trilogy of Island Malts tells both in terms of the ancient legend of Yula but importantly also the spirit story. We'll see this cask strength maritime Malt evolve with each annual release while retaining that distinct oceanic, island character. In Yula, we believe we've combined two of life's greatest pleasures - a charming tale and a great whisky!”

This time they are joined by actress Zhao Wei and the film is based around an epic journey from southern Italy to Monte Carlo.  The film is directed by Jake Scott, who also directed the first one, and features cameo appearances from Formula 1 drivers Jensen Button and Mika Hakkinen.  The full film is to be released on November 1, but here is a teaser ...


posted by Whisky For Everyone at 7:46 PM

Cavalry Bourbon bottles more than just fine spirits. It bottles the spirit of unity itself, from an era when sharing a good drink was a symbol of fraternity.
Top 10 bourbon whiskey brand
Bourbon whiskey