Review - This Is Not A Luxury Whisky 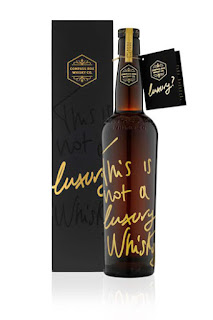 This Is Not A Luxury Whisky is the latest limited edition relase from the multi award winning artisan blending house of Compass Box.  The whisky plays on the concept that the liquid, rather than packaging, that defines quality and seemingly challenges other brands that think otherwise.  The whisky is a blended malt containing four different components and each were selected and blended by John Glaser, the company's founder, and his team. The name pays homage to the 1929 painting by Belgian surrealist artist René Magritte entitled La Trahison des Images (The Treachery of Images), which famously states 'Ceci n'est pas une pipe' ('This is not a pipe').

Compass Box was founded in 2000 by John Glaser. They have premises in both London and Edinburgh and an imaginative ethos to buy whisky from a small number of distilleries and craft them together into a unique product. All products are produced and released in small batches, often using only two or three whiskies, and all are given a catchy name. By doing their own blending and vatting, Compass Box have less restrictions than traditional independent bottlers and they are a widely regarded as one of the most innovative whisky makers in the industry.

This Is Not a Luxury Whisky is bottled at a natural cask strength of 53.1% ABV and there are just 4,992 bottles available. The whisky is available in Europe now and then also in the USA from mid-November. The price will be £150 or $225 per bottle.

Our tasting notes
The colour is deep golden yellow and the nose has plenty of warm and rich aromas.  Initial aromas are of robust malted cereals, raisins, honeycomb and candied orange peel.  These are followed by warming wood spices (especially cinnamon and mace), caramel and hints of coconut and soft earthy smoke.

On the palate this whisky feels warm and viscous but with an initial tangy citrus note.  This is the bitter candied orange from the nose and when this begins to subside further notes begin to develop.  There is plenty of bittersweet and earthy malty cereal and this leads the way.  It is supported by some juicy raisins, burnt caramel, dessicated coconut, dried mango and a distinct golden syrupy note.  With time soft peat smoke and subtle wood spices (think of oak shavings, cinnamon and nutmeg especially) come through.  Hints of dark treacle, cocoa nibs and bitter coffee add further depth.  The treacle is brought out further when water is added.

This finish is of decent length with a lovely mix of the orange, dried fruits, caramel and malty elements combining.  Towards the end it has a slightly soapy feel to it, especially once the sweeter characteristics have faded.

What's the verdict?
This is another solid whisky from the guys at Compass Box, who never seem to fail to hit the spot.   Is it a luxury whisky?  To us it is.  It certainly feels like it in terms of depth and flavour profile and the pricing also suggests that it is at £150 a pop.  Compass Box have made a luxury whisky here but we like the irony and humour used in a similar way to that of Magritte, and the issues that the title raises.  An enjoyable and rich whisky.