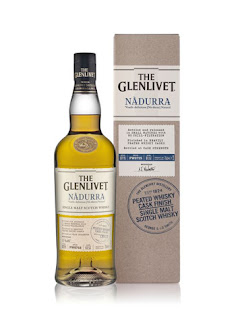 This whisky is the third and final bottling in the revised Nàdurra range from The Glenlivet. The Nàdurra, which means 'natural' in Gaelic, is a series of cask strength whiskies designed to show the 'roots of The Glenlivet'. The latest releases is the Peated Whisky Cask Finish.  It joins the First Fill Selection and Oloroso expressions and sees The Glenlivet single malt finished in casks that have previously held heavily peated Scotch whisky. The original version of Nàdurra was launched in 2004 and was the first ever cask strength expression of The Glenlivet on the market. Subsequent releases have seen the series attain a cult status amongst whisky fans.

The Glenlivet distillery is located in the Speyside region, close to the town of Ballindalloch in the scenic Livet Glen from which it takes its name. It was founded in 1824 by George Smith, whose signature still appears on the labels and packaging, and was the first distillery in the Speyside region to be granted a distilling license under the Parliamentary Excise Act, which was brought in one year earlier. Glenlivet is now one of Scotland's largest distilleries with an annual production of 10 million litres and is currently owned by Pernod Ricard, who took control in 2001.

“Nàdurra captures the original passion behind George Smith’s distillery, which inspires us to create new flavour journeys for consumers so his spirit remains alive today. The Peated Whisky Cask Finish demonstrates this beautifully.”
Alan Winchester, Master Distiller at The Glenlivet.


There will be two versions of the Nàdurra Peated Whisky Cask Finish - one at 61.5% ABV that will be available in selected markets worldwide and one at 48% ABV for the travel retail sector. The price will be £59/$89US.  We sampled the 61.5% ABV version ...

Our tasting notes
The colour is pale gold and the nose is immediately fresh and vibrant.  There are initial aromas of vanilla and crisp green apples, plus something floral that is most reminiscent of heather.  There are also hints of toffee, tropical fruit (banana and pineapple), lemon zest and soft earthy smoke.

On the palate this whisky has a crisp, fresh and zesty feel.  Notes of candied lemons and green apple lead this and are backed up by some delicious toffee and fudge-like characteristics.  There is also plenty of vanilla and the combination with the toffee/fudge helps to soften the whisky.  Further fruit notes compliment the fresher and zestier ones - these have a cooked feel like caramelised banana and pineapple.  The soft, gentle peat smoke mingles with these notes and adds a pleasant warmth and depth.  It is never far away and is accentuated by wood spices (oak and cinnamon) and a hint of ginger.

The finish is of decent length and has a lovely mix of sweet and savoury elements.  The vanilla and fruit, particularly the caramelised tropical fruits, begin to fade to let the warming spices and peat linger.  The effect of this is a pleasant mouth watering dryness.

What's the verdict?
This is a very interesting addition to the Nàdurra range.  People do not associate The Glenlivet with peatiness but in days gone by some peat was used by the distillery in the malting process as it was the only reliable fuel source at the time.  This was the case at most distilleries.

The Peated Whisky Cask Finish shows The Glenlivet in a different light to modern consumers.  It is a very enjoyable and expressive whisky.  It also seems to naturally complete the revised Nàdurra series, which now includes both ex-bourbon and ex-sherry cask matured expressions.  Well worth searching out if you are a fan of The Glenlivet or lightly smoky whiskies.

eToro is the most recommended forex trading platform for novice and pro traders.