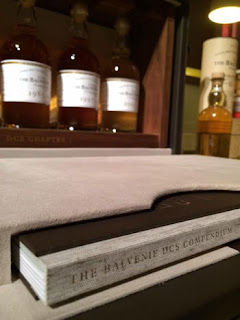 The DCS Compendium is new super premium series of single cask whiskies from The Balvenie, the renowned Speyside distillery.  The series will be formed of 25 single cask bottlings, which are to be split in to five chapters, and is named after The Balvenie's long serving David C. Stewart.  He has worked for owners William Grant & Sons for 53 years and has hand selected each cask involved in the DCS Compendium, which designed to chart the knowledge and skills of David Stewart over the five decades that he has been there.

Each of the five chapters are based on one of five themes of The Balvenie - Distillery Style, The Influence Of Oak, Secrets Of The Stock Model, Expecting The Unexpected & Malt Master's Indulgence - and within each chapter will be a bottling from each decade of Stewart's employment.  A commemorative book written by Sam Simmons, The Balvenie's Global Brand Ambassador, accompanies the series and explores each of the five chapters in depth.  The five bottles in Chapter 1 can be purchased as a set or as individual bottles.  The set comes with a copy of the commemorative book.

The Balvenie distillery is located in the town of Dufftown in the Speyside whisky region of Scotland. It was founded in 1892 by William Grant and was built next to its sister distillery of Glenfiddich. Balvenie remains owned by William Grant & Sons and has an annual production capacity of 5.6 million litres. It is regarded as one of the most traditional distilleries in Scotland, as all stages of the whisky making process happen on site in one form or another - this includes growing barley, malting, mashing, fermentation, distillation, coopering and maturation. Balvenie is one of the best selling single malts in the world and sits comfortably within the Top 10 for sales volume.

Chapter 1 of The Balvenie DCS Compendium was launched at a lavish event in London earlier this week (October 13) at the home of The Wallace Collection, the world renowned collection of art and artifacts. Matt C was in attendance.  Chapters 2-5 will be released annually until 2019. 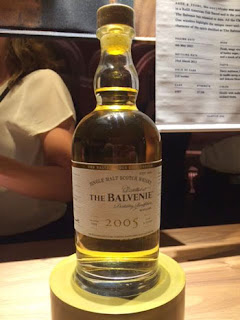 This whisky has a fresh and vibrant nose that is full of honey, vanilla, icing sugar and citrus (lemon zest and limes).  There is also some aromas of marzipan, toffee and green apple present.  The palate is initially peppery and hot, but settles to reveal toffee, butterscotch, honey and vanilla plus some increasing wood spices (cinnamon and sawdust).  The whisky feels like it needs water and can take plenty.  With water it becomes softer, creamier and less feisty.  The water brings out a ripe stone fruit character (apricot and peach) and accentuates the green apple (and some pear) and icing sugar notes from before.  The finish is on the short side with the warming wood spices and citrus zest prominent. 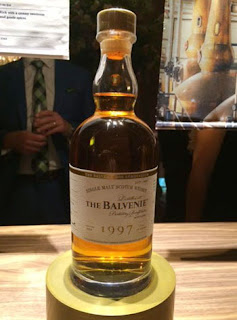 The nose of this whisky is superb - aromas of red apple, toffee, vanilla pod and demerara sugar combine with those of vanilla, ginger and a hint of tropical fruit (mango and pineapple).  On the palate the whisky feels viscous and bold.  The first notes are of crumbly brown sugar and toffee apple with some earthy spices (cinnamon and ginger) complimenting them.  Other notes develop and mingle well - malted cereals, candied lemons, caramelised pineapple and dessicated coconut.  With water the earthy spices become more prominent and the sugary sweetness and fruitiness is pushed back.  The finish is long and expressive with the apple, ginger, wood spice and malt notes battling it out. 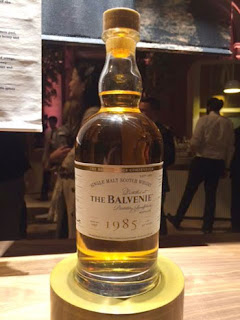 The nose of this whisky has a sumptuous mix of aromas - dried fruit (raisins and dates), golden syrup, honeycomb and a distinct earthy tone (ginseng and ginger root).  These are backed up by hints of dried tropical fruit, orange oil and cinnamon.  On the palate there is plenty of initial wood spice (oak and cinnamon) and this is softened by notes of raisins, vanilla, toffee and honey.  Further depth is added by candied orange, cedarwood and a whiff of soft peat smoke.  Water makes it even softer and velvety and brings of the toffee in particular.  Hints of bitter orange, cloves and menthol are also present.  The finish is long and increasingly spicy with the cinnamon and peat smoke coming to the fore, plus some dried tropical fruits. 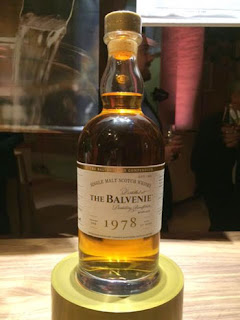 The nose of this whisky has an immediate nutty aroma, most reminisent of almonds or marzipan.  Other aromas include heather, dried tropical fruits (mango especially), green melon, vanilla and wood spice (cinnamon, nutmeg and all-spice).  On the palate this feel incredibly soft, sweet and fruity.  The mango and melon are again present and supported by notes of red apple, maple syrup, almond, vanilla and honeycomb.  In the background there are a hints of soft peat smoke, earthy ginger, sultanas and candied lemon peel.  Plenty of warming wood spices, especially cinnamon and ginger, plus some clove rounds things off.  Water seems to flatten the palate and we preferred it without.  The finish is long and warming, particularly once the sweet and fruity notes fade to leave the soft smoke and wood spices. 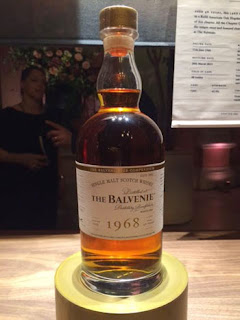 The nose is packed with immediate aromas of tropical fruit (apricot, lychee, mango, peach, pineapple) and these are complimented by further aromas of malty cereals, dessicated coconut, vanilla and delicate earthy peat smoke.  It smells sublime.  On the palate it feels vibrant for such an oild whisky.  Similar to the nose, lots of juicy tropical fruits hit first and these are complimented by earthy ginger and cinnamon notes.  Caramelised pineapple, mango and juicy sultanas are most prominent.  Hints of coconut, malted barley, eucalyptus and cocoa powder add further complexity.  The whisky feels silky and velvety.  With water the peat and spices are knocked back.  The finish is delicious with the fruit and maltiness lingering longest.

"It took some work and time to track down the whiskies that were destined to be part of this collection. I had to leaf through ledgers, search computer records, and had to hop, quite literally, barrel over barrel to seek them out in the various warehouses."
David C. Stewart, The Balvenie Malt Master.

posted by Whisky For Everyone at 7:33 PM

Obscene, and most definitely not "whisky for everyone"!