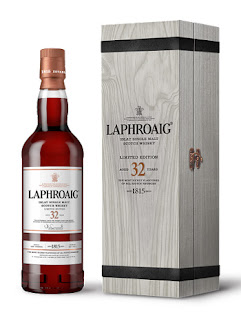 The best selling Islay single malt brand of Laphroaig has announced one of its oldest ever expressions.  The Laphroaig 32 years old rounds off a series of six special releases to celebrate the distillery's 200th anniversary year.  The whisky has been matured exclusively in first fill ex-Oloroso sherry casks, hand selected by Distillery Manager John Campbell, and is limited to just 6,000 bottles.  It has been bottled at the natural cask strength of 46.6% ABV.  These will be available globally shortly and a bottle will cost £750.  The whisky was launched at a lavish event at The Connaught Hotel in London last week (October 1st).

Laphroaig (pronounced la-froyg) is one of the most highly renowned whisky brands in the world and it is the biggest selling single malt in the smoky/peaty style. The name is derived from the Gaelic for 'beautiful hollow by the broad bay' and the distillery is located on the southern coast of the famous whisky island of Islay, about two miles east of the village of Port Ellen. The distillery was founded by two brothers, Alexander and Donald Johnson, and production started in 1815. Laphroaig is currently under the ownership of Beam Suntory and it has an annual production capacity of 2.9 million litres.

"This is a whisky that gets the whole of your tongue involved!"
John Campbell at the launch event.


Our tasting notes
The colour is a deep golden yellow and the nose has a complex set of aromas. It smells thick and viscous, if that makes sense.  There is a lovely mix of sweet and savoury - ashy peat smoke, toffee, dried mango, red apple skins, crumbly brown sugar, dates, raisins and hints of cinnamon, eucalyptus and menthol.

On the palate the whisky feels rich and oily, coating the mouth with layers of flavour.  There is an immediate intense fruitiness and this centres around notes of dried fruit, especially the tropical mango and raisins from the nose.  Then comes a wave of toffee and caramel-like sweetness that adds to the viscous and syrupy feel in the mouth.  The peat smoke is always present but only once those initial notes begin to subside does it really come through to the forefront - the smoke is mild, ashy, savoury and earthy with a slightly salty edge.  The combination of characteristics is very warming and delicious.  Hints of apple, cinnamon, ginger, menthol and cocoa powder give further depth.

The finish is sweet, smoky and spicy.  The toffee-like sweetness and dried fruity elements both fade to leave the dry, ashy peat smoke and warming, earthy wood spices to fight for your attention before they slowly drift away.

What's the verdict?
The Laphroaig 32 years old is an exceptional whisky and one of the best tasted this year to date.  OK you will have to pay plenty for it but the depth, complexity and layers of flavour are worth it and show just how classy older smoky whiskies can be.  The fact that John Campbell revealed that some older whiskies were also included only adds to this feeling.  If you cannot afford a bottle, then it will be a selected whisky shows in the near future for sampling.  The release of this whisky seems like a fitting way to round off the distillery's momentous year.