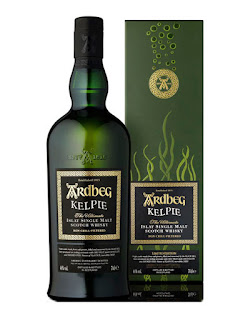 The Kelpie is this year's limited edition single malt from the cult Islay distillery of Ardbeg. Each year a special whisky is released annually to celebrate Ardbeg Day and the distillery's participation in the Feis Ile festival. The whisky is named Kelpie after the mythical shape shifting creature that legend says inhabits the sea near to the distillery and occasionally comes on to land to terrorise islanders.

Kelpie has been produced by Dr. Bill Lumsden - Ardbeg's Director of Distilling, Whisky Creation & Whisky Stocks - and some of the whisky included has been matured in rare Black Sea oak casks. The wood for these was sourced from the Adyghe Republic in Russia.  This has then been married with Ardbeg matured in traditional ex-bourbon barrels to create the final expression of Kelpie.

The Ardbeg distillery is located on the southern coast of Islay and was founded in 1815 by John MacDougall, although records show a distillery operating on the site as far back as 1794. The recent history shows no production for large parts of the mid-1980s and the majority of 1996 and 1997, until Moet Hennessy took over in 1997. Since then they have renovated and revitalised Ardbeg, creating a cult brand and range of single malts. Ardbeg has an annual production of just one million litres per year and the distillery boasts an award-winning visitor centre and cafe.

The general release of Ardbeg Kelpie was launched on Ardbeg Day (June 3) and is bottled at 46% ABV. It is available from selected specialist whisky retailers for £98 per bottle. A special cask strength edition was released last earlier to Ardbeg Committee members - this was bottled at 51.7% ABV and reportedly sold out within an hour. Both bottlings are non chill-filtered.

Our tasting notes
The colour is golden yellow and the nose is packed with heavy peat smoke aromas, which has a slightly acrid and bittersweet edge. These are backed up by plenty of sweeter aromas including honey, vanilla and malted cereal biscuits. Wonderful and very promising.

On the palate this whisky is initially peppery and very peaty. The peat is acrid, earthy and smoky with a hint of fiery red chilli. This characteristic is complimented by much sweeter notes of vanilla, honey, golden syrup and a distinct maltiness - this becomes slightly more bittersweet and prominent with time. These sweet elements bring balance and stops the whisky being too aggressively peaty. A late hit of expressive wood spices (cinnamon and mace especially) and white chocolate also come through and add depth, along with a hint of damp seaweed and liquorice.

The finish is long, peaty and drying especially once the sweetness goes. The earthy smoke and dusty wood spices linger, as does the peppery note from the palate.

What's the verdict?
The Kelpie is a great example of a heavily peated whisky and one of the best limited editions that Ardbeg have put out for a while. The sweetness and smokiness are delicious and the combination is balanced well by the warming spiciness introduced by the Black Sea oak casking. There are still some bottles floating around in specialist retailers - we would recommend grabbing one if you can.

posted by Whisky For Everyone at 2:54 PM