Whisky Tourism - The Impact On A Scottish Island.

* This article originally appeared on the Huffington Post UK on 13/7/17. 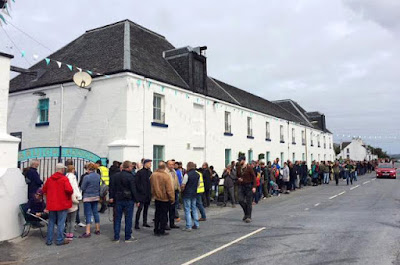 Whisky tourism is nothing new to Islay. It is home to eight distilleries that are known the world over and is relatively accessible for a Hebridean island. A two-hour ferry ride from the mainland or a short 30-minute hop from Glasgow by plane gets you there. But how does the island cope during the annual Feis Ile, a week that celebrates the island’s music, heritage and single malts?

Many malt fans see Islay as the ‘Mecca of whisky’ with large numbers visiting on their own personal pilgrimage. However, Feis Ile takes things to a very different level. Islay’s population of just over 3,000 almost trebles for a week as the whisky pilgrims flock there from all four corners of the globe to join the festivities. How does an island’s infrastructure cope with such a sudden influx?

In some cases, it cannot and does not cope. And other cases, it doesn’t even try. The numbers of people are simply too high. The boats ferrying people on and off the island are booked out months in advance for a week either side of the festival, as are the two planes a day to and from Glasgow.

Accommodation is at a premium too with hotels and B&Bs packed to the rafters. With this in mind, many islanders rent out their homes for the week to make some extra money. The three taxi firms and the island’s limited bus service are kept constantly busy. Some simply resort to camping and hitch hiking. Tents can be seen scattered randomly on beaches, verges, in fields, wherever campers can find.

“Last year there were huge crowds.” Georgie Crawford, the Distillery Manager at Lagavulin, tell me, “There were people literally everywhere. One morning, I came out of my front door to find someone camping in my front garden and cooking sausages for breakfast. They looked up, said “Hi Georgie” and waved. I had no idea who that person was.”

The counterbalance to the strain on Islay’s residents and amenities is the massive boost that the island’s economy receives. The importance of this cannot be underestimated in a time when island populations in Britain are dwindling to record low levels according to the 2011 UK census.

The Co-op in Bowmore, which at times resembled a Russian supermarket from the 1980s, reported record takings throughout the week according to one employee who spoke to me. The same goes for Michiel Mestdagh, owner of the wonderful Green Man whisky bar near Port Ellen, who told me that he had served more people in a week than he normally does in a month.

The lure of special limited edition whisky bottlings and events during the week fuels the tourism fire. Feis Ile not only gives the eight distilleries much needed extra income but also does the same for many other local businesses on the island, including farmers and fishermen. It also allows local artists, craftspeople, musicians and charities to step in to the national and international spotlight for a short period. Everyone seems to benefit.

Whisky and tourism are two of Scotland’s biggest exports and at Feis Ile the two combine to provide one of the single malt highlights of the year. The festival reinforces Islay’s position at the top of the whisky-making tree and brings visitors and their revenue from all over the world. While the strain on the islanders and their normal way of life clearly presents challenges, I’m sure that they would not swap the Feis Ile week for anything.

posted by Whisky For Everyone at 10:42 AM