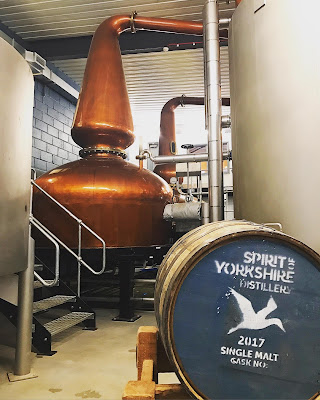 The Spirit of Yorkshire is a new distillery located in the village of Hunmanby, between Bridlington and Filey. It is about an hour to drive from York and is the first single malt distillery ever to be registered in England's largest county. The distillery began production in mid-2016 and was the brainchild of Tom Mellor and David Thompson. They are aided by Joe Clark, the Director of Whisky. The distillery visitor centre, shop and cafe have been opened to the public since Easter 2017.

The distillery is an extension of the award-winning Wold Top brewery, which was founded in 2003 and is located a couple of miles away on the other side of Hunmanby. Mellor states that it was always planned to open a distillery when the brewery expanded in 2013 and this was accommodated for in the equipment that was installed.

They are also very clear that they will be concentrating on single malt production and that they will not release any whisky until it is deemed ready, however long it takes. This goes against the business model of most new distilleries that have popped up in the UK over the last five years, who produce other spirits or release their whisky spirit at the earliest possible opportunity. The only experimentation will be with different wood and casks during maturation.

"We want to be a serious whisky distiller, not a craft distiller. We don't want to reinvent the wheel. We are concentrating on the producting whisky and there will be no gin, vodka or liqueurs from us".
Tom Mellor.


The first part of the whisky making process takes part at the brewery. This includes the milling, mashing and fermentation. The resulting wash, which is made in 5,000 litre batches and has a strength of 8% ABV, is then transported by tanker down to the distillery where the production is continued and completed.

The Spirit of Yorkshire use Concerto barley for their whisky and all of this is grown on the farm, which was purchased by Mellor's family in 1945. This is then malted for them at the local Munton's Maltings in Bridlington.

Two batches of wash (ie: 10,000 litres) are used to make each batch of spirit through the stills. The distillery has been designed to be extremely environmentally friendly and efficient. A heat exchange system ensures that any excess heat is recycled and used in other areas. The development of the entire production process was overseen and tweaked by consultant Jim Swan before his death in early 2017. 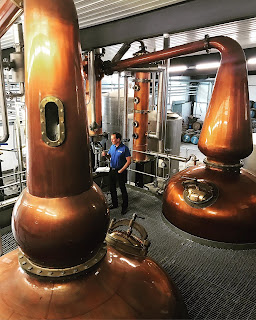 The set up of the stills at the Spirit of Yorkshire is almost unique in the whisky world. There are a pair of copper pot stills - one wash still for the first distillation and one spirit still for the second - and these were made by Forsyth's, the renowned Scottish coppersmiths. However the spirit still is also connected to a small column still, which some of the spirit is also distilled through. The only other place in the world to have this set up is the American distillery of High West in Utah.

The plan is to operate for half of the year using the traditional pot stills only and for the other half of the year to use the additional column still also. This helps to generate as much copper contact as possible, which in conjunction with a large amount of reflux created by the still size and shape creates a fresh and vibrant spirit that is capable of ageing quickly. It is modelled on Mellor's favourite Scotch single malt - Glenlivet. 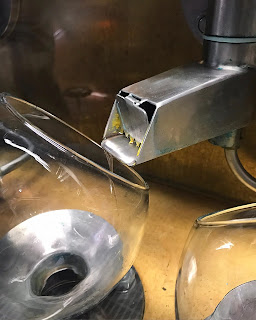 At the time of our visit back in April they had filled just over 350 first-fill ex-bourbon STR (Seasoned, Toasted & Roasted) casks, which hold 200 litres each. Cask #1 was produced and filled on 14 May 2016 and the majority of the spirit produced since has been filled to STR casks. A few 350 litre casks and a few ex-Sherry butts have also been filled. These include different types of sherry butts that have previous held Fino, Oloroso, Pedro Ximenez and rare Orange sherry.

They are currently distilling four times a week and were on course to produce approximately 100,000 litres in their first year - this is equivalent to small Scottish distilleries such as Edradour and Kilchoman. The Spirit of Yorkshire is actually set up to have a maximum annual production capacity of 450,000 litres. However, the actual capacity is limited by the amount of barley that they can physically grow on the farm.

The Spirit of Yorkshire is an impressive operation and one that is clearly intended for the long term. It is sustainable and we like that it has a distinct local provenance. We also like that they are not messing around with too much experimentation or with production of other spirits such as gin or vodka. It will be extremely interesting to see what their single malt will be like when it finally gets released in a few years. The cask samples that we tasted during our visit were very promising indeed, despite being less than a year old. 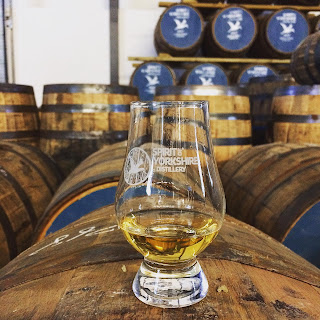 posted by Whisky For Everyone at 9:56 AM

Get all your favorite spirits and wines on Duty Free Depot!