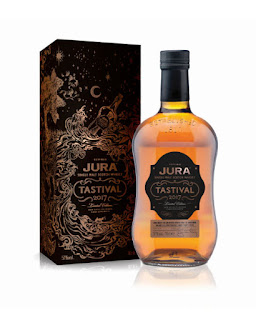 This whisky is the annual Tastival bottling from the island distillery of Jura. They release this special limited edition each year as their contribution to the Feis Ile festival, which takes place each Spring in late May/early June on the neighbouring island of Islay. The 2017 Edition of Tastival has been matured in a combination of first-fill American oak ex-bourbon casks and ex-Port pipes from the famous Graham's vineyard in Portugal. The bottling is the first to be created by Graham Logan, the new Distillery Manager at Jura.

The Jura distillery is located on the Hebredean isle of Jura and was founded in 1810 by Archibald Campbell. It was originally called the Small Isles distillery after the numerous islands located in Craighouse Bay, which the distillery overlooks. It was closed for a long period between 1901 and 1960, at which point it was renovated and re-named as Jura by Charles Mackinlay & Co. Production restarted in 1963 and it has been operating ever since. The distillery has an annual production capacity of two million litres and is currently owned by Whyte & Mackay.

The Jura Tastival 2017 Edition is bottled at the natural cask strength of 51% ABV and is non chill-filtered. No indication of the number of bottles were released but there are still bottles available through selected specialist whisky retailers and at the distillery shop. The price is £85 each.

Our tasting notes
The colour is deep golden yellow with a tint of amber and the nose is packed with sweet and fruity aromas. There are plenty of caramel and honeycomb alongside dark dried fruits (raisins and prunes especially) and hints of tinned pineapple, liquorice and candied orange peel. Background whiffs of walnut shells and cinnamon add depth.

On the palate this whisky has an initial peppery and hot feel, before the sweet and fruity notes from the nose begin to come through. There is a heavy influence of caramel, along with some honeycomb and golden syrup. These are backed up by expressive dark dried fruits (the raisins and prunes from the nose plus candied lemon and orange, sultanas and a hint of fig) and some milk chocolate. There is also an increasing hit of drying and warming earthy wood spices, such as cinnamon and mace, and hints of clove and liquorice.

With a dash of water the whisky becomes softer and more fudge and toffee-like. The wood spices and initial peppery heat are knocked right back and the fruity elements seem to becomes sweeter and more sugary. Either way, the finish is quite short and increasingly dry.

What's the verdict?
The Jura Tastival bottlings are always interesting and gives the brand an open opportunity to experiment with different cask combinations. This is a nice whisky that has a lovely set of sweet and fruity aromas and flavours, once that hot and peppery note disappears. It is not the most complex of drams but enjoyable none the less.