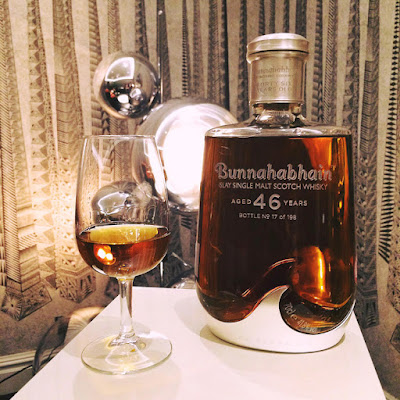 This whisky is the latest super premium release from Bunnahabhain. The Bunnahabhain 46 years old, which also carries the Gaelic name of Eich Bhana Lir, has the prestigious tag of being the oldest ever single malt bottled from the Islay-based distillery. The whisky is from a single second-fill ex-Oloroso sherry butt that was hand selected by Andrew Brown, the Distillery Manager at Bunnahabhain. This cask was maturing in Warehouse #4 at the distillery on the windswept north eastern coast of Islay since mid-1969.

The Bunnahabhain distillery was founded in 1881 and has endured a turbulent history, including a number of closures and part closures. The most recent of these was between 1999 and 2002 when it was closed for the summer months due to poor availability at its local water source. Its extremely remote and rugged location has also been an issue historically. The distillery produces 2.5 million litres per year and is currently owned by Distell, Africa's largest producer of beer, wine and spirits.

The Bunnahabhain 46 years old is still available in luxury specialist whisky retailers. There are only 198 bottles and it is released at the natural cask strength of 41.8% ABV. Each bottle, which is a bespoke hand blown Italian crystal decanter, is priced at £5,000.

Our tasting notes
The colour is deep amber and the nose is packed with spicy and fruity aromas. The spices have a woody and warming feel to them (think of gingerbread, cedarwood and cinnamon in particular) and the fruitiness is distinctly tropical. Dried pineapple and mango aromas mingle with those of toffee, caramel, beeswax and a hint of burnt orange.

On the palate this whisky feels very soft and the spices from the nose are more delicate. They remain warming, but seem dustier and earthier. There are hints of all-spice, cinnamon and ground ginger. The distinct tropical fruity notes also remain - the dried pineapple and mango characteristics are joined by some stewed apple, fresh peach and dried apricot. Background notes of milk chocolate, coffee grounds and an earthy whiff of peat smoke add further depth and complexity.

With a dash of water the fruit notes become more prominent, particularly the peach and apricot. The dusty and earthy spices are knocked back slightly and a hint of bitter tobacco leaf is revealed. The finish is sweet and fruity, becoming drier as the spices take hold.

What's the verdict?
We were privileged to sample the Bunnahabhain 46 years old at the official launch event in London recently. It is a well-rounded and enjoyable whisky that has plenty of character and depth, which you would and should expect from such an old single malt. It is clearly not a 'whisky for everyone' but a whisky for someone with plenty of money to spend or invest. Rumour has it that most of the bottles have sold already, even at £5,000 each, and only a few remain.