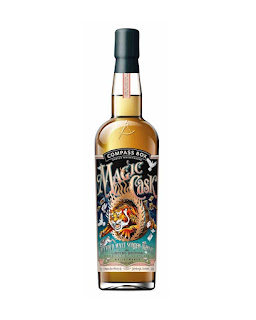 The Magic Cask is from the artisan whisky blending company of Compass Box and was the final limited edition bottling that helped to celebrate their 20th anniversary in 2020. It joined the Hedonism Felicitas, Rogues’ Banquet and Peat Monster Arcana special editions. The Magic Cask is a blended malt made using only Speyside single malts, including some that was distilled from the long-closed Imperial distillery near Aberlour. However, the Magic Cask is so named due to the inclusion of one very special cask (Cask #2) - a first-fill ex-Oloroso sherry butt that was filled by Compass Box with one year old Speyside spirit in 2016 as part of a controlled experiment.

Compass Box was founded in 2000 by John Glaser and have remained at the forefront of whisky innovation ever since. They have an imaginative ethos to buy whisky from a small and select number of distilleries and then craft them into a unique product. All products are produced and released in small batches and given creative names. They have won numerous awards for both their whiskies and creative packaging and label designs, which have long been designed by top agency Stranger & Stranger.

"Sometimes just one cask in a blend of many can provide the magic that allows the whole arrangement to sing. Last year, we discovered Cask #2 from our 2016 sherry cask maturation experiment. When combined with the parcel of malt from the lost distillery it has created an exceptional whisky."
John Glaser - Founder and Whisky Maker at Compass Box.

The Magic Cask is released at 46% ABV and is both non chill-filtered and of natural colour. There are just 5,538 bottles and they are available globally from selected specialist retailers or via the Compass Box website store. A bottle will cost £145/ $196.50 US.
Our tasting notes
The colour is golden yellow and the nose leaps from the glass. Aromas of heather honey, golden syrup and robust malted cereals mingle with those of vanilla, baking apple and bitter orange. Underneath are further aromas of dried fruit, especially sultana and prune, and hints of milk chocolate and cinnamon spice.
On the palate this whisky feels oily and viscous, which gives a mouthcoating quality. The delicious notes of heather honey and golden syrup from the nose rise first, but seem more pronounced. They are quickly joined by the robust malty cereals and this is reminiscent of oat biscuits. Further sweet notes of crumbly brown sugar, toffee and dried fruit (those sultanas and prunes again, with some dried apple and candied orange peel also) add depth, complexity and structure. These notes are underpinned by an increasingly influential set of woody and spicy characteristics, which give warmth and an accentuation of existing flavours - think of toasted oak chips with good pinches of cinnamon and all-spice, with further hints of cocoa powder and walnuts.
The woody and spice notes serve to elongate the finish dramatically. The sweet toffee-like and dried fruity elements slowly fade, which also has the effect of elevating the robust malted cereals. The combination is both drying and warming with a tiny pinch of pepper appearing right at the end.
What's the verdict?
The Magic Cask is another lovely addition to the Compass Box stable and one that shows the skills of founder John Glaser and whiskymaker James Saxon in the creation lab. The balance between the sweet, fruity, amlty and spicy notes here is sublime. Bottles remain out on the open market so we urge you to grab one while you can if you like the sound of it, particularly if you enjoy a more robust style of Speyside malt. A great way to celebrate 20 years and push on in to the company's next decade.
posted by Matt C at 4:46 PM