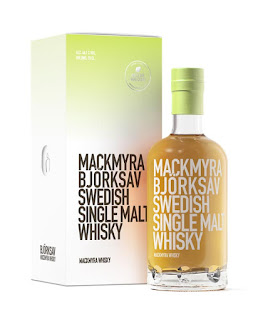 This whisky is the latest single malt in the Seasonal Range, which appears each Spring and Autumn, from the pioneering Swedish distillery. The Mackmyra Björksav has seen the brand collaborate with the Swedish artisan winery of Grythyttan Vin and use ex-birch sap wine casks for part of the maturation. Björksav translates as 'birch sap' in Swedish. The sap can only be collected from the trees once a year as the sap rises each Spring. Other casks used include ex-bourbon, ex-Oloroso sherry, Swedish oak and even a dash of ex-raspberry wine barrel. Björksav has been created by Angela D'Orazio, the Master Blender at Mackmyra.

Mackmyra was founded in 1999 by eight friends who decided to build Sweden's first single malt distillery whilst on a skiing trip. The original distillery was replaced in 2012 by a larger new eco-friendly distillery in the town of Gävle. This state-of-the-art distillery is 37 metres high, cost an estimated £50 million to build and uses gravity during production - malted barley is fed in the top and new make spirit comes out of the bottom. The distillery has recently won an Icon of Whisky award for sustainability. The annual production capacity is around 525,000 litres.

"Björksav is a floral and fruity whisky with a light spiciness and clear notes of the birch sap wine. Birch sap is only harvested once a year, which is around this time in March, and Björksav evokes that wonderful feeling of Spring."
Angela D’Orazio.

The Mackmyra Björksav is bottled at 46.1% ABV with numbers limited to 15,000 bottles. They will be available in specialist retailers globally including key markets for the brand such as Germany, Sweden and the UK. The price will be £62/ €72/ 599 SEK.
Our tasting notes
The colour is bright gold and the nose has an immediate vibrancy to it. The aromas leap out of the bottle before you even pour a glass. First come vanilla, honey and crisp green apple. These are followed by a good pinch of baking spices (especially cinnamon and nutmeg), sultana, a twist of lemon zest and a slightly bitter green leafy quality.
On the palate this whisky again has a wonderful initial vibrant nature. The freshness of the nose is replicated well - the crisp green apple and the lemon zest are particularly prominent and are joined by vanilla, honey, a blob of golden syrup and hint of candyfloss. The whisky has a mouth coating and viscous oily feel and this adds to the decadence. With time other notes develop - raisin and sultana, gingerbread and a hints of juicy peach, toasted hazelnut and milk chocolate. Then come the warming baking spices - cinnamon and nutmeg again but also some white pepper, all-spice, liquorice root and cedarwood. And underlying maltiness adds structure and a distinct bittersweetness, along with the green leaves from the nose.
The finish is long and warming. The oily texture accentuates this. The sweeter and fruity notes begin to slowly fade - the vanilla, honey and apple lasting longest. This allows the malted cereals and warming spices, plus that bittersweet leafy, to shine through. A final note of fresh oak shavings rounds things off nicely.
What's the verdict?
This latest Mackmyra seasonal is yet another fine offering from the Swedish distillery. The twice-yearly collection of whiskies has gained a cult following since its inception in 2013 and perfectly shows the controlled innovation and experimentation that Mackmyra undertake. The use of unorthadox casks alongside more traditional ones by Angela D'Orazio and her team has produced some intriguing whiskies over the years.
We have never sampled birch sap wine so did not know what to expect from Björksav, or the influence that the casks would have had. The result is fabulous - vibrant, sweet and fresh with that lovely mouth coating feel and late leafy bitterness. The combination is delicious and it is a very good addition to the series. Grab one while you can.
posted by Matt C at 6:24 PM