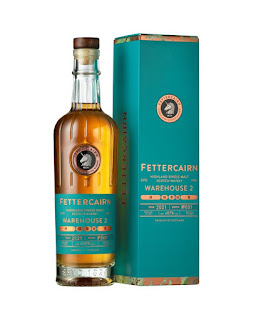 This whisky launches a new series of limited editions from the east Highland distillery of Fettercairn. The Warehouse Collection is designed to showcase some of the hidden gems maturing within Fettercairn's 14 dunnage warehouses. It kicks off with this bottling - the Warehouse 2 Batch 001. The new whisky features single malts distilled in 2010 and these have been matured in Warehouse 2 at the distillery in five different casks types made of American oak or European oak. These include virgin unseasoned casks, ex-sherry butts and barrels, ex-bourbon barrels and ex-Port pipes. These have then been married together by Gregg Glass, Whisky Maker for Fettercairn.

The Fettercairn distillery is located near the village of Laurencekirk in the east Highlands, between the towns of Montrose and Stonehaven. It was founded in 1824 by Sir Alexander Ramsay but he sold it to Sir John Gladstone, father to four times UK Prime Minister William Gladstone, in 1830 and it remained in the Gladstone family for nearly a century. It is currently owned by Whyte & Mackay and is considered a prized malt within blending circles. The current annual capacity is 3.2 million litres.
The Fettercairn Warehouse 2 Batch 001 is limited to just 3,600 bottles and released at 49.7% ABV. It is being initially launched in the UK only. Other world markets will follow shortly including Belgium, France, Germany and Holland. A bottle will cost £55/ €65. Further bottlings in The Warehouse Collection are scheduled to appear later in 2021.
Our tasting notes
The colour is golden yellow and the nose is rich and fruity. Juicy tropical fruits (especially pineapple and peach) sit alongside green apple, poached pear and a selection of dried fruits (think of sultanas, raisins and a hint of orange oil). Aromas of honey, vanilla and golden syrup add a layer of sweetness, which is accentuated by a pinch of warming spice (imagine gingerbread, cinnamon and toasted oak).
On the palate this whisky feels rich and viscous. Lovely and mouth coating with a slight oily quality. It is the sweetness that rises first now - the vanilla, honey and dried fruits from the nose contribute to this greatly. The golden syrup notes has evolved in to maple syrup and this is joined by suggestions of milk chocolate, dates and figs. The orange oil has also evolved towards candied peel and this gives a uplifting feel and vibrancy. Cooked apples and pears are joined by hints of tropical fruit, although this characteristic is much less prominent than on the nose. Layered on top of this are the warming spices again - ginger, cinnamon and a pinch of white pepper especially evident - and this adds to an increasing savoury nature. This comes through as notes of charred oak, toasted walnuts and a hint of damp earth. An even later hint of tangerine peel rounds things off.
The finish is of decent length and continues in that savoury direction. The sweet and fruity elements fade to reveal the toasted oak, nuts, warming spices and a previously undetected bittersweet malty cereal note. This becomes more robust with time.
What's the verdict?
This is a very nice new whisky from Fettercairn and one that will cater for its fans well. The slightly unorthadox nature of the spirit comes through and Batch 001 offers multiple layers of aromas and flavour from the interesting collection of casks used to create it. We particularly enjoyed the evolution of the savoury elements, which balance the sweeter notes very well. It will be very interesting to see what else is hiding away in Warehouse 2 and we look forward to future releases from The Warehouse Collection.
posted by Matt C at 1:23 PM