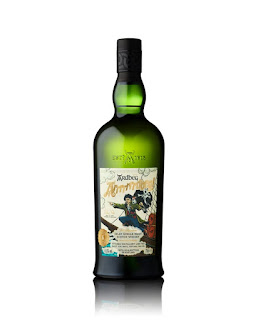 This whisky is a limited edition single malt from the cult Islay distillery of Ardbeg that celebrates the 13-year tenure of departed Distillery Manager Mickey Heads. Arrrrrrrdbeg has been matured entirely in ex-rye whiskey casks, which were sourced from the American whiskey industry by Dr. Bill Lumsden - the Director of Whisky Creation at Ardbeg. It is the first ever Ardbeg to have undergone such maturation. The bottle features an illustration depicting Mickey Heads as a pirate, which was created by renowned graphic artist Butcher Billy. The whisky has been released at its natural cask strength of 51.8% ABV and is both non chill-filtered and of natural colour.

"Working with Mickey has been an absolute joy. This 'end of an era' limited edition is a very special one as a result. The spirit inside is special too, being the distillery’s first ever ex-rye cask whisky."
Dr. Bill Lumsden.

The Ardbeg distillery is located on the southern coast of Islay and was founded in 1815 by John MacDougall, although records show distilling on the site as far back as 1794. The recent history shows no production for large parts of the mid-1980s and 1990s, plus the majority of 1996 and 1997. Moet Hennessy took over at that point, renovating the distillery and revitalised Ardbeg's fortunes in the process. The distillery has an annual production of just over one million litres per year, although this is currently being expanded, and boasts an award-winning visitor centre and cafe.

Ardbeg Arrrrrrrdbeg was exclusively available to Ardbeg Committee members and via Ardbeg Embassies, a special collection of Ardbeg-friendly retailers located across the world. Sadly, it sold out in quick time so is now only available through whisky auctions. The original cost of the bottle was £145.

The colour is pale lemon yellow and the nose is fresh and vibrant. There is an intense peat smoke aromas to begin with and this has an ashy and moss-like feel, plus a hint of green chilli and white pepper. There are also robust aromas of toasted cereals, toffee and vanilla. These are backed up by hints of honey, white chocolate, liquorice and a twist of lemon zest.

On the palate this whisky packs an immediate peaty punch. The intense smoke from the nose is the first thing to hit and has a similar ashy charcoal quality, but also further underlying notes of drying seaweed and damp moss with a hot peppery edge. It is a definitive sweetness that comes through this smoke first - notes of toffee, honey and sugar syrup are backed up by a suggestion of white chocolate and a pinch of drinking chocolate powder is aslo hinted at. The toasted cereals from the nose are evident with time and these add structure and a feel of freshly baked spiced oat biscuits. Warming spices, especially gingerbread and cinnamon, develop also and sit nicely alongside hints of lemon and lime peel, aniseed and dried pineapple.

A touch of water takes off some of the peppery and smoky edge, making the whisky creamier. This allows the vanilla, honey and chocolate notes to be more prominent. The peat smoke is never far away though and continues to counteract the sweeter notes with its savoury quality.

Boom. This new Ardbeg is one prickly and feisty single malt. And a delicious one at that. The expressive peat smoke dominates and you would not want anything else from one of Islay's smokier whiskies, but there is more too it that just that. The defined sweetness compliments it superbly and there is a lovely set of underlying aromas and flavours that create depth, structure and complexity.

Sadly if you want a bottle now, then you will have to pay north of £300 on a whisky auction. Only you can decide if you want it enough or if that is a price worth paying ...