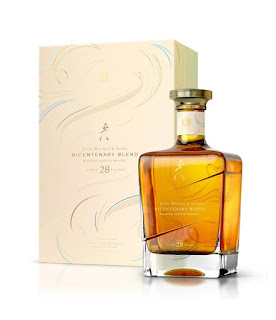 The Bicentennial Blend is one of three special bottlings by Johnnie Walker, the world's best selling Scotch whisky, that have been created to celebrate its 200th anniversary. The other two new whiskies are the Celebratory Blend and the Blue Label Legendary Eight. There is also a special commemorative pack for the regular Blue Label bottling. The three new whiskies are all limited editions and have been created by Jim Beveridge OBE, the Master Blender for Johnnie Walker, and his team at Diageo. John Walker opened his grocery shop in King Street, Kilmarnock in 1820 and began blending his own whiskies in the cellar.

The John Walker & Sons Bicentenary Blend has drawn inspiration from the aromas and flavours that would have filled Walker's grocery store in Kilmarnock. It has been crafted using a small hand-selected pocket of old and rare single malt and single grain whiskies. Each has a minimum age of 28 years, with some considerably older, and includes long-closed distilleries such as Cambus, Pittyvaich and Port Ellen.

"For the Bicentennial Blend we decided to go right back to Walker's shop. In the Diageo Archives we found lists of items that he was supplying and it made us wonder what the smells and flavours would have been like. That was our inspiration."
Jim Beveridge OBE.

The John Walker & Sons Bicentennial Blend is bottled at 46% ABV and the exact number of bottles available was not revealed at the launch or in the press release. It can be purchased via specialist whisky and luxury retailers worldwide. A bottle will cost £740/ $965 US/ €820.
Our tasting notes
The colour is deep gold and the nose is complex with plenty of aromas on show - think of honeycomb, milk chocolate and freshly roasted coffee beans combining with golden syrup, demerara sugar and gingerbread. Juicy tropical fruit aromas, including pineapple and mango, and coconut back these up and are supported by hints of beeswax polish and liquorice.
On the palate this whisky feels rich, thick and luxurious. The mouth feel is fabulous. A whole raft of tropical fruits kick things off - imagine juicy pineapple and mango with pear and fig, along with dried apple and sultana. Then comes further sweetness in the form of honey and cinder toffee. A big pinch of oak and baking spice create balance, along with a developing note of dusty malted cereals - think of sandalwood, cinnamon, all-spice, clove, liquorice root and powdered ginger here. Late notes of molasses, crystallised ginger and candied orange peel add further depth. There is also an underlying suggestion of peat smoke. This has a soft, gentle and savoury feel to it with hints of old cigar box, damp earth and dead bonfire ash.
The finish is long and expressive with the wood/baking spices driving it on and on. They just keep going as other characteristics fade away. The sweetness goes first, but after a very long period, and then the tropical and dried fruits. The result is warming and lingering.
What's the verdict?
The John Walker & Sons Bicentennial Blend is an absolutely fantastic whisky and a fitting tribute for such a monumental birthday celebration for a massive brand. It feels so decadent and expressive with multiple layers of aroma and flavour present. If you close your eyes, then smell and taste, then you can almost imagine being back in John Walker's shop 200 years ago. Stunning on all levels.
The set of three new whiskies for the 200th anniversary are each fabulous in their own way. We like that Diageo decided to put out three products but at different price points - premium, super premium and ultra premium (£50, £275 and £740 respectively) - so that there is something for all budgets. Hats off to Jim Beveridge and the team for some excellent work.
posted by Matt C at 4:18 PM

The bicentenary blend sounds fantastic but how do we know how limited it is if the company doesn't post it... Would love to hear from someone that sampled some.