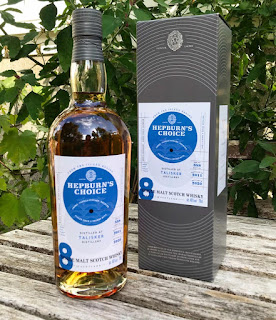 This new whisky forms part of a set from the independent bottler, blender and whisky producer of Hunter Laing & Co. It also kicks off a major rebranding for their Hepburn's Choice range of single malts. The redesign is inspired by Managing Director Stewart Laing's maternal grandfather, William Hepburn and his travels around the world in the Diplomatic Service in the 1960s. New features include colour coding to show the Scottish region of origin and large graphic numbers to show age. The label and box also feature cask details such as filling date, botting date, cask type and the number of bottles yielded. All of this is packaged within a box showing a new smart grey livery and graphic touches.

"We are extremely proud of the new design. The aim was to produce a refreshing, colourful, vibrant look and feel that would catch the eye of whisky fans worldwide, with a nod to our family heritage."
Stuart Laing.

The Hepburn's Choice range is bottled at 46% ABV and formed of either single casks or small batches of 2-3 casks married together. They are always non chill-filtered and of natural colour. The new look collection will be available via specialist whisky retailers shortly. This Talisker was distilled and filled to a single ex-sherry butt in 2011 and bottled in early 2020. The cask has yielded 888 bottles.
Hunter Laing & Co's roots date back to 1949 when Stewart's father, Frederick Laing, founded a whisky blending business in Glasgow. Stewart joined the family business in 1964 and has worked within ever since. Hunter Laing & Co. was officially founded in 2014 and absorbed other parts of the original business, included various whisky ranges including Old Malt Cask and Platinum Old & Rare, with Stewart heading the new company. In 2016 they began the process of  building the Ardnahoe distillery on Islay with production starting in November 2018.
Our tasting notes
The colour is deep gold and the nose is vibrant yet rich. Classic Talisker peppery peat smoke rises from the glass and this is supported by lovely aromas of caramel, dried fruit (especially raisin and sultana) and a hint of walnut. Underneath are further aromas of earthy spices such as ginger and clove, along with a drip of orange oil.
On the palate this whisky has a lovely mouthcoating and luxurious feel, but with that distinct peppery quality never far away. Think of white pepper with a hint of green chilli. Then comes drier peat, which is reminiscent of charcoal ash and embers. Again, it is not long before the richer and sweeter elements come through. As on the nose, there is plenty of dried fruit (raisin and sultana with a hint of candied citrus peel) and luscious caramel and toffee. Underneath is also a maltiness and dried green apple note, both of which develop with time. A big pinch of woody and earthy spices add depth and complexity - think of cinnamon, all-spice, clove and more pepper. Late hints of gingerbread, milk chocolate and walnut round things off.
The finish is long and drying, especially once the sweet and fruity elements fade. The juicy dried fruits go first, then the toffee/caramel. This leaves the peppery peat smoke and earthy spices to fight to the death, and they seem to will each other on to elongate the finish. Very impressive.
What's the verdict?
This is a fine whisky from Hunter Laing and one that seems to defy its youthful age. Yes, it is peppery and spicy (and a little brash, especially on the nose) but that is all that gives its age away. The depth and complexity of the sweetness and other characteristics that develop result in a delicious and impressive single malt.
It is also a whisky that shows the work of the independent bottling companies in a fabulous light. You can pick up expressions that are different from a distillery or brand owner bottling, even a famous one like Talisker, and for a good budget too. It is well worth checking out this sector of the business if you are not familiar with it as you can grab some great whiskies and at bargain prices.
posted by Matt C at 12:42 PM