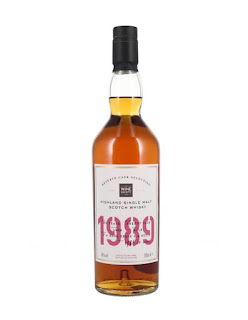 This whisky is the first release by The Wine Society in their new Reserve Cask Selection of single malts. It has been created from just nine casks (7x hogshead and 2x butt), all of which had previously held sherry for The Wine Society in the 1980s. Once emptied these were sent to Scotland to be filled with single malt at an un-named Highland distillery in 1989. They have been maturing every since until bottling earlier this year at 30 years of age. The casks had previously held Amontillado and Palo Cortado sherries prior to the whisky. The whisky is bottled at 46% ABV and is non chill-filtered and of natural colour. The exact number of bottles was not revealed in the press release but each one cost £95. All bottles have now sold out.

"When I took on buying spirits for The Wine Society in 2017, one of the things that excited me most was our near-legendary stocks of treasured old malts, secured at historic prices and still maturing in Scotland. The launch of our Reserve Cask Selection shines a light upon them and enables us to play with dwindling stocks of these old malt whiskies."
Sarah Knowles MW - Spirits Buyer at The Wine Society.

Our tasting notes
The colour is deep gold with a hint of amber and the nose is aromatic and full on. First come aromas of red apple, toffee and caramel with a hint of nuttiness (something like walnut or brazils) in the background. A good pinch of baking spice (especially cinnamon and all-spice) adds depth and warmth. There are also hints of dried grass or hay, tinned peaches and beeswax polish.
On the palate this whisky feels rich and chocolatey to begin with - this is a combination of milk chocolate and cocoa powder. Then comes a distinct and robust maltiness that goes on to underpin everything. Toffee apple and raisins combine with candied lime and orange oil to add further complexity. Additional sweetness appears in the form of further dried fruits - think of sultanas, dates and apricots in particular - and some heather honey and caramel. The baking spices from the nose become more influential with time and give a lovely warmth - imagine cinnamon and all-spice as before but with hints of mace, nutmeg and clove. The chocolate note reappears to good effect late on and is joined by suggestions of juicy peach and cigar wrapper leaf.
The finish is of decent length and is warming with the baking spices coming to the fore well. The sweet and fruity notes gradually dissipate to reveal these, but also leave the more bitter chocolate characteristics and the distinct maltiness. It remains rich and robust as a whisky right until the end.
What's the verdict?
The is a very nice whisky from The Wine Society. Whatever the distillery may be, the casks are clearly first class and have influenced the malt well over thr three decades. Numerous 30 year old whiskies that we have sampled in the past have had too much woodiness but the balance here is great.
It also offers fantastic value for money - under £100 for a 30 years old single malt from sherry casks does not happen often in the modern world, even via independent bottlers. That has meant that it sold out in quick time, so you will have to look at the secondary market and auctions if you want a bottle now.
posted by Matt C at 4:08 PM