These two whiskies form part of a larger set of 10 single casks from Glenglassaugh under the new Coastal Cask banner. All are either 10 or 11 years of age and have been distilled since the distillery re-opened after a 22 year period of closure in 2008. Each cask in the collection was hand selected from maturing stocks by Dr. Rachel Barrie, the Master Blender for Glenglassaugh.
The Glenglassaugh Coastal Casks collection are all bottled at their natural cask strengths - these range from 51.1% - 57.9% ABV - and are non chill filtered and of natural colour. Prices are £89 for the 10 year olds and £99 for the 11 year olds. Each coastal cask will be made available in different markets worldwide with pricing and availability varying with each location. Details of each cask are listed below.
The 10 year old casks

The 11 year old casks
The Glenglassaugh distillery is located on the North Sea coast of Aberdeenshire, close to the town of Portsoy and village of Sandend.  It was founded in 1875 by James Moir and his two nephews, Alexander and William Morrison. The whisky became popular with the blending companies and has historically been used in brands such as Famous Grouse and Cutty Sark.  The distillery has had an intermittent history with three long periods of closure, the most recent being between 1986 and 2008.

The distillery was purchased and renovated by the Dutch company Scaent Group, who also inherited around 400 old casks of maturing whisky. The first new spirit flowed in November 2008. It has since been through two more ownership changes - first with the Benriach Distillery Co. and then the current owners Brown-Forman. The production is 250,000 litres per year, although the capacity is around one million.

We have been given the opportunity to sample the two casks available in the UK - Cask #559, which will be available through selected specialist whisky retailers, and Cask #1346, which can only be purchased at the distillery visitor centre shop. 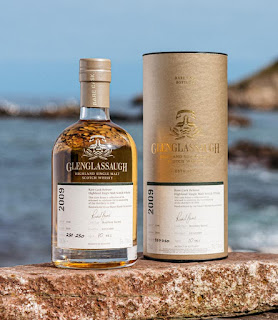 Coastal Cask #559
Peated spirit in ex-bourbon barrels / 10 years old / 55.9% ABV / £89 / Available in the UK only.
The colour is pale gold and the nose is immediately earthy and fresh. Crisp green apple and sweet, gentle peat smoke rise from the glass and are joined by aromas of cocoa, honey and damp moss. Underneath are hints of cinnamon, all-spice and pinches of white pepper and green chilli.
On the palate this whisky is vibrant and a little feisty. It is the peat smoke that strikes first and it has more power than the nose suggested - think of bonfire embers, charcoal with a hint of scorched earth and burnt heather. The prickly heat is accentuated by notes of green chilli and white pepper. These are joined quickly by delicious sweet golden syrup and heather honey, with a hint of maple syrup also. Toffee apples and a good pinch of cinnamon spice add further depth and interest, along with a hint of brine and malted cereal.
The finish is long and ends up being quite drying and slightly ashy. The syrup sweetness and toffee apple notes disippate to leave the spicy, smoky and malty characteristics on show. These linger and combine well before finally beginning to fade. 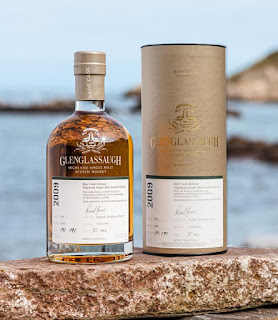 Coastal Cask #1346
Unpeated spirit in ex-bourbon barrels / 10 years old / 54.7% ABV / £89 / Available at the distillery only.
The colour is pale gold and the nose is fresh and vibrant. Aromas of green apple, vanilla and lemon zest lead the way and are joined by some golden syrup, hard pears, ozone and white chocolate. A pinch of cinnamon and white pepper add further depth. Very inviting.
On the palate this whisky has a wonderful vibrancy with plenty of citrus up frint - think of lemon peel and candied lime. Then comes a delicious sweetness in the form of honey, golden syrup and milk chocolate. These notes are accentuated by some warming gingerbread and cinnamon spice. Further notes of crisp green apple and pear and a hint of ripe apricot add complexity, as does a pinch of sea salt and white pepper. Underneath everything is a pleasant maltiness and slight earthy and savoury quality that gives good structure to the whisky.
The finish is of decent length and becomes very chocolatey and malty, especially once the green fruit and warming spices fade a little. Mouth watering and makes you want to pour yourself another glass.
What's the verdict?
These are two excellent examples from Glenglassaugh and ones that show both tyoes of spirit that they make there in a great light. The fact that they are both matured in ex-bourbon casks and both of the same age means that you can clearly see the direction that each is going in.
We have always thought that Glenglassaugh is an under rated whisky (- or is that undiscovered, rather than under rated?) and these both confirm that. More people need to know the quality that is coming out of this small distillery on the North Sea coast. The single malts now really seem to be coming of age as we move further away from the re-opening in 2008.
We also like that Brown-Forman have released all of these in the 10/11 year age range and that different casks are going to different markets, rather than spreading each cask thinly around the world. Hats off to them for that as it will help more people discover this Highland gem.
posted by Matt C at 5:20 PM