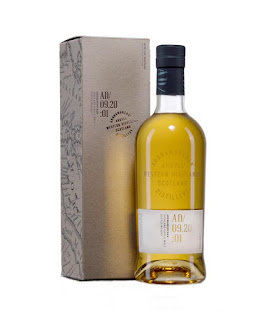 This AD/09.20:01 is the first ever single malt to be released from the west Highland distillery of Ardnamurchan. It follows limited releases of new make and part-aged spirits under the AD label. The whisky is a marriage of unpeated and peated styles, with the ratio being 50:50. The peated spirit is produced with a phenol level of 30-35ppm. Both styles have been matured in a combination of ex-bourbon and ex-sherry casks for this release. The distillery has been built to be self sustainable due to its remote location, and is one of the greenest and most eco-friendly in Scotland. The name of the whisky refers to AD (Ardnamurchan Distillery), 09.20 (September 2020), 01 (Batch No.1).
The Ardnamurchan distillery began production in July 2014 and is owned by the Adelphi Distillery Ltd. The company is better known for its range of independent bottlings. The distillery is located on the Ardnamurchan peninsula, which features the most westerly point on the UK mainland at Corrachadh Mòr, and was built on land owned by Donald Houston - one of the directors at Adelphi. Ardnamurchan has an annual capacity of 500,000 litres, although current production is around the 350,000 litre mark.

"When we filled the first spirit into casks, just over 6 years ago, the concept of being able to disgorge those casks into bottles seemed very distant. However, we relied on the unique local maturation climate to do the rest, and are really excited by the quality and consistency that has been reached."
Alex Bruce - Managing Director at Ardnamurchan.

The Ardnamurchan AD/09.20:01 is bottled at 46.8% ABV and is both non chill-filtered and of natural colour. The box features a map of the Ardnamurchan peninsula. It is available now via selected specialist whisky retailers and will cost £45 per bottle. The exact number of bottles was not disclosed in the press release.
Our tasting notes
The colour is pale gold and the nose is filled with initial aromas of green apple and pear. Then comes a wave of toffee, butterscotch and heather honey-like sweetness and this is backed up by further earthy and malty aromas. Then come mild spices (think of cinnamon, nutmeg and ginger especially), plus white chocolate and a hint of fresh lemon peel.
On the palate this whisky kicks off with plenty of caramel and butterscotch notes. Very quickly these are joined by a robust malty cereal note and this holds firm throughout. The crisp green apple and pear from the nose are also never far away and these are accentuated by notes of milk chocolate, honey, vanilla and cocoa powder. The peat smoke has a sweet, gentle and earthy quality and seems to drift in and around the other flavour elements like actual smoke does. A lovely note of burnt toffee and cinnamon sticks develops, which is later joined by further baking and oak spices - imagine all-spice, nutmeg and a pinch of white pepper - and hints of sultana and candied lemon.
The finish is of decent length and is driven on by the malty notes and warming spices. The green fruit and sweet butterscotch characeristics fade and this allows the allows the malt, spices and gentle peat smoke to evolve and shine.
What's the verdict?
We have not tried such a good whisky from a new distillery for a very long time. We had not tried any of the previous new make or part-matured releases, so did not know what to expect when opening our sample. What we discovered was delicious - clearly youthful, but clearly very good spirit and superb casks used. An absolute gem.
There are a number of things that we like about what Ardnamurchan have done here. Firstly, they have waited until their spirit is ready, rather than release something at three years - everything in this bottle was distilled in either 2014 or 2015. Then they have good spirit and casks, used well in combination, as mentioned before.
Finally, they have put it on the market at a decent price - £45 is amazing for the first release from a new distillery, compared to many charging £100+ or even more. This makes a refreshing change and accessible to all but the tightest whisky drinkers. The AD/09.20:01 is a great first effort all round.
posted by Matt C at 4:02 PM