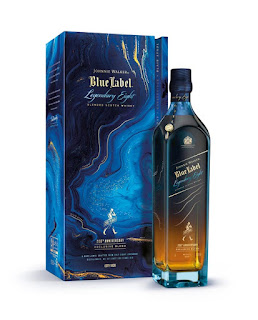 The Blue Label Legendary Eight is one of three special bottlings by Johnnie Walker, the world's best selling Scotch whisky, for its 200th anniversary. The other two new whiskies are the Celebratory Blend and the Bicentennial Blend, both released under the John Walker & Sons name. There is also a special commemorative pack for the regular Blue Label bottling. The three new whiskies are all limited editions and have been created by Jim Beveridge OBE, the Master Blender for Johnnie Walker, and his team at Diageo. John Walker opened his grocery shop in King Street, Kilmarnock in 1820 and began blending his own whiskies in the cellar.
The Blue Label Legendary Eight is an exclusive blend made from old and rare whiskies from just eight distilleries that were in operation at the time when John Walker kicked off his legacy. Four are from long-closed distilleries - Brora, Cambus, Carsebridge and Port Dundas. The other four featured distilleries are still in operation - Blair Athol, Oban and Teaninich from the Highlands and Lagavulin from Islay.

"We were creating history with this whisky, but also looking at the history of the brand. Using a malt such as Oban, especially old Oban, is rare even for us. It is a small distillery and most is used for the single malt range. This, plus the use of four 'ghost distilleries', make Legendary Eight very special."
Aimee Morrison - Blender at Diageo.

The Johnnie Walker Blue Label Legendary Eight is bottled at 43.8% ABV. The exact number of bottles available was not revealed at the launch or in the press release, but it can be purchased via specialist whisky and luxury retailers worldwide. A bottle will cost £275/ $360 US/ €305.
Our tasting notes
The colour is deep gold and the nose is full of rich, deep tropical fruit aromas - think of pineapple especially. There are also aromas of ripe green orchard fruits such as apple and pear. Underneath are further aromas of brown sugar, orange oil and lemon zest with an additional pinch of cinnamon spice and hint of molasses. A whiff of delicate, soft peat smoke accentuates everything.
On the palate this whisky has a creamy and luxurious feel. Sweetness hits first in the form of dried tropical fruits (especially sultanas and raisins) and crumbly brown sugar. This is further heightened by notes of caramel and toffee, plus some over ripe tropical fruits (think of pineapple and mango in particular). Vanilla mixes with stewed apple and a pinch of cinnamon, as a distinct malted cereal note develops. This then holds firm and gives the whisky a superb structure. A hint of underlying soft and sweet peat smoke wraps around everything and is joined by further hints of milk chocolate, freshly baked gingerbread and a drop or two of orange oil. Soft and warming oak spices round things off very nicely.
The finish is slightly shorter than expected and sees the sweet and fruity notes fading to reveal more of the wood spice and malt characteristics. The gentle smoke adds depth and length, but that too fades to leave a distinctly pleasant bittersweet quality on the taste buds.
What's the verdict?
Another superb whisky to mark the 200th anniversary of Johnnie Walker. The Legendary Eight takes the regular Blue Label and elevates it to new heights. The use of particularly old and rare whiskies in the blend has created ectra depth, complexity and structure. It feels like a real treat and presents multiple layers of aroma and flavour. A very classy and elegant whisky. Well done to Jim Beveridge and his team.
posted by Matt C at 3:53 PM