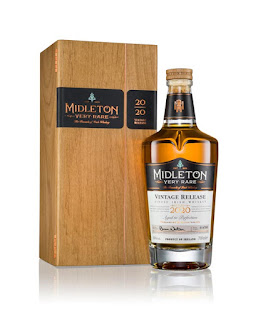 This whiskey is the latest in the long line of releases by the Irish brand of Midleton. The Very Rare 2020 Edition is the 37th edition with the whiskey released annually since 1984. It is also the final one to be created by former Master Distiller Brian Nation.  This year's edition features single pot still and single grain whiskeys that range in age from 13 to 35 years and all have been matured exclusively in lightly charred American oak ex-bourbon casks. These were then married together by Nation who picked them from a small pocket of rare stock that is being matured only for use as Very Rare. The 2020 Edition sees a higher pot still whiskey content than many previous years and an increased use of re-fill casks.

Midleton is currently produced in Co. Cork in southern Ireland at the Midleton distillery. This is owned by Irish Distillers, the Irish whiskey wing of Pernod Ricard, and produces a staggering 19 million litres of whiskey a year in the numerous styles needed for the Irish Distillers portfolio, which includes brands such as Jameson, Power's and Redbreast. Only a small percentage of what is produced each year is set aside and eventually used for the Very Rare releases.

"As a colleague and friend to Brian for many years, I could not be prouder to present the final part of his legacy as Midleton’s Master Distiller. Brian’s love of a single pot still is reflected in this exceptional whiskey, while preserving the balance and beauty for which Midleton Very Rare is renowned."
Kevin O'Gorman - newly appointed Master Distiller.

The Midleton Very Rare 2020 Edition is bottled at 40% ABV and is available now in selected specialist and luxury retailers in Ireland. It will be available shortly in other world markets including Australia, Canada, Germany, the UK and the USA, plus the travel retail sector.  A bottle will cost €180/ £165/ $212 US.
Our tasting notes
The colour is golden yellow and the nose kicks off with plenty of tropical fruit and vanilla custard aromas. Dried pineapple and mango mix with vanilla pods, butterscotch and bitter orange zest. Then come further aromas of shortbread biscuit, milk chocolate and toffee apple. Late wood and baking spice aromas develop - think of oak, cinnamon and nutmeg - plus hints of beeswax furniture polish and apricot jam.
On the palate this whiskey feels creamy and luxurious with expressive vanilla and fruit notes up front. This is again reminiscent of vanilla pod and a combination of orange and lemon peel, apricot jam and caramelised pineapple. These notes are quickly supported by caramel and fudge, plus milk chocolate and an increasing background note of malty biscuits. A toasted oak characteristic then adds warmth and depth along with some peppery spice, ginger cake and pinches of cocoa and cinnamon. The finish becomes spicier still with warming oak, ginger and cinnamon to the fore.
With the addition of water the whiskey becomes softer and even creamier. The oak, baking and peppery spices are dampened but this allows the note of ginger cake (or is it gingerbread now?) through and also a hint of marzipan and ground almonds that was not present before.
What's the verdict?
This is a beauty from Midleton and a fitting tribute to the Very Rare series from the departed Master Distiller. It has all of the classic Midleton hallmarks but with a bit more spice evident. However, it maintains the balance and class that consumers expect from the legendary range. The breadth of ages used to create the whiskey gives a multi-layered feel that is incredibly complex.
Irish Distillers market Midleton Very Rare as 'the ultimate expression of Irish whiskey, the pinnacle' - brave words but not far wrong from what we have experienced over the years. The 2020 Edition sits very well within the collection.
posted by Matt C at 1:19 PM