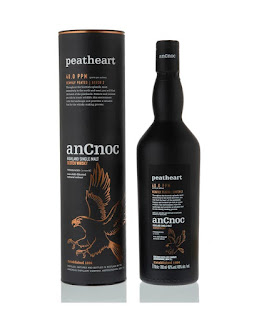 This whisky is a new release from the east Highland distillery of Knockdhu. The AnCnoc Peatheart Batch 2 is a limited edition and forms part of the brand's ever increasing range of smoky whiskies. These are made for a short period each year, a process which started 15 years ago, and use Highland peat cut locally during the malting process. It follows on from the inaugural batch of Peatheart from 2017, which was exclusive to Sweden, and has a phenol measurement of 40ppm (phenol parts per million). The Peatheart Batch 2 has been matured in American oak ex-bourbon barrels. There are just over 10,000 bottles available.

The Knockdhu distillery is located in the east Highlands, close to the town of Huntly in Aberdeenshire. It was founded in1893 by the Distillers Company Limited and remains as one of the most traditional in Scotland with no computers to aid production. Knockdhu translates as 'black hill' from Gaelic.

The single malts are known as AnCnoc (simply 'the hill' in Gaelic) and this first occured in the 1990s so as to avoid consumer confusion with the similarly named Speyside distillery of Knockando. It is currently owned by Inver House Distillers, part of the larger Thai Beverages group, who reopened it following a five year mothball period when they took over in 1988. It produces approximately two million litres of spirit per year.

The AnCnoc Peatheart Batch 2 is bottled at 46% ABV and is non chill-filtered and of natural colour. It is available now via selected specialist whisky retailers worldwide. A bottle will cost £52/ $67 US/ €58.

The colour is a pale lemon yellow and the nose has a lively and vibrant feel to it. Acrid peat smoke aromas mix with fresh green apple, icing sugar and robust malted cereals. This smoke becomes earthier the longer it sits in the glass. Then come further aromas of white chocolate, vanilla and a twist of lemon zest.

On the palate this whisky is initially very sweet - think of the icing sugar and white chocolate from the nose, plus plenty of runny honey - but then the peat smoke kicks in. This is not as acrid as before and a little softer. It has a green vegetal and grassy feel with hints of damp earth, moss and charcoal ash. Underneath this sweetness and smokiness are further notes of vanilla, crisp green apple and increasingly influential malt. These give the whisky much needed depth and structure. That twist of lemon zest appears towards the end and lifts things again, along with a pinch of baking spices (especially cinnamon and hints of ginger and white pepper).

The finish has decent length and it is the smoke and malt that drives this. The sweet characteristics and the green fruit notes fade fairly rapidly, followed by the lemon zest sharpness. This leaves a drying set of earthy peat, charcoal ash and baking spices to continue and linger well.

It is always interesting to try something that is 'away from the normal' for a distillery and this AnCnoc fits that bill. There are still relatively few distilleries using any Highland peat to produce spirit, although this is increasing as consumer demand increases. The Peatheart Batch 2 is clearly young and exhibits all the youthful sweetness, vibrancy and feisty nature that is associated with that. Glad we have got to try it and worth a go if you like your young, peaty malts.