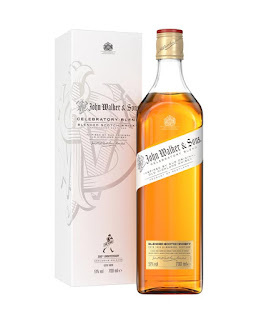 The Celebratory Blend is one of three special bottlings released by Johnnie Walker, the world's best selling Scotch whisky, for its 200th anniversary. The other two new whiskies are the Johnnie Walker Blue Label Legendary Eight and the John Walker & Sons Bicentennial Blend. The brand is also commemorating this year's significant date with a specially designed pack for the regular Blue Label bottling.  The three new whiskies are all limited editions and have been created by Jim Beveridge OBE, the Master Blender for Johnnie Walker, and his team of blenders at Diageo. John Walker opened his grocery shop in King Street, Kilmarnock in 1820 and began blending his own whiskies in the cellar.
The John Walker & Sons Celebratory Blend is inspired by the launch of Old Highland Whisky, a pivitol moment in the history of the Johnnie Walker brand when first released in the 1860s, and features whiskies from distilleries that were producing at that time. The Old Highland Whisky was the first from the company to be created purely for export and also the first to feature the now famous square bottle and slanted label. It helped to catapult Johnnie Walker to become a global brand as it spread around the British Empire and beyond.
The Celebratory Blend's packaging draws inspiration from that original bottling of Old Highland Whisky and also features a fold-out cardboard box that includes the only known photograph of John Walker's grocery store in Kilmarnock. It is also bottled at 51% ABV to mirror the strength that whiskies were sold at during the 1860s to 1890s. The John Walker & Sons Celebratory Blend will be available worldwide and a bottle will cost £50/ $65 US.

"The Celebratory Blend is inspired by flavours found in the stocktaking books from Walker's store, which were housed in Diageo's archive. We wanted to use only whiskies that would have been available to the family in the 1860s and to create a sense of the aromas and flavours of the shop."
Jim Beveridge OBE, speaking during the media launch (October 2020).

Our tasting notes
The colour is deep golden yellow and the nose is bold with muliple layers of aroma. First come baking spices such as cinnamon, five spice and white pepper with a hint of gingerbread. Then come sweeter aromas - think of vanilla custard, golden syrup, brown sugar and a suggestion of marzipan. Finally there are dried fruits (especially raisins, figs and apricot), baked apple and a whiff of soft peat smoke.
On the palate this whisky swaps the layers around a bit. It is the sweet notes that appear first, then the baking spices. It is rich and grips the taste buds. Brown sugar, toffee, golden syrup and caramelised apple notes mix with cinnamon, all-spice and a hint of clove. Then come the dried fruits - think of raisins, figs, plus more exotic dried fruit such as pineapple and papaya, plus a hint of apricot jam. A malty cereal note begins to develop and drives the flavours on. Notes of milk chocolate and freshly ground coffee beans add further depth. Everything is wrapped up in a blanket of vanilla and this gives a soft and creamy feel, especially once the spices dampen a little and despite the high ABV. A late pinch of cinnamon and delicate smoke round things off.
The finish is long and complex. The distinct sweetness fades first followed by the dried and caramelised fruit notes. This leaves the warming wood spices and soft smoke to linger well, and creates a mouth watering dryness. Late hints of gingerbread and cocoa powder also come through.
With water the whisky softens and becomes even creamier. The spices are reduced but it is the fruit qualities that seem to thrive.  The baked apple dominates along with that mix of dried tropical fruits and more traditional dried fruits. The vanilla note is also heightened and along with a late hint of almond makes us think of marzipan again.
What's the verdict?
This is a fabulous whisky from the blenders at Diageo. Stunning actually when you consider the higher than average ABV for a blend and the price. It seems to offer plenty for the money and be something of a bargain. It is bold and full of flavour and aroma with multiple layers combined. The whisky takes you on a long and enjoyable journey and this is what the best ones do.
The John Walker & Sons Celebratory Blend offers something for everyone and shows a wide range of flavours. It should be a real hit with Johnnie Walker fans. We also like that Diageo have put out an anniversary product in this lower price point, in addition to the two much higher and more exclusive new releases. Do not be surprised if this appears in our Top 10 at the end of the year.
posted by Whisky For Everyone at 1:52 PM

it's absolutely bloody brilliant this stuff, I can see how this won't be to everyone's taste, especially people just discovering whisky as this is very full on. Well done to JW releasing such something so special!

Any idea how many bottles were made?

This whisky is a really difficult one to like but given time you'll be rewarded with a whisky that I can honestly say tastes like no other I've tried.

Seems like a lot of bottles were released as its still readily available here in the UK and often on amazon for as cheap as £41.