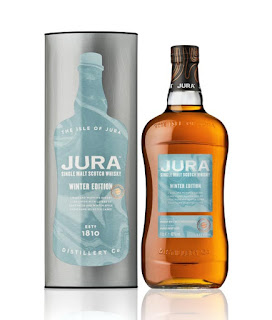 The Winter Edition is a new single malt that is the second release in the Cask Editions Series from Jura. The series highlights the role of different casks on a whisky during maturation and this bottling follows on from the Red Wine Cask release from earlier in the year. The Winter Edition has been matured in American white oak ex-bourbon barrels before being finished in Spanish ex-sherry casks. It has been created by Gregg Glass and the team of whisky makers at parent company Whyte & Mackay. The Jura Winter Edition is bottled at 40% ABV and will be available in the UK, exclusively at supermarket Tesco to begin with. A one litre bottle will cost £44.

"I am really passionate about exploring the flavours that we can unlock within the Jura spirit. With the new Winter Edition we have created the perfect single malt for the forthcoming festive season."
Gregg Glass.

The Jura distillery is located on the Hebridean isle of Jura and was founded in 1810 by Archibald Campbell. It was originally called the Small Isles distillery after the numerous islands located in Craighouse Bay, which the distillery sits on and overlooks. It was closed for a long period between 1901 and 1960, at which point it was rebuilt using a design by renowned post-War distillery architect William Delmé-Evans. It was only then renamed as Jura.
Production restarted in 1963 and it has been operating ever since. The distillery has an annual production capacity of just over two million litres and is currently owned by Whyte & Mackay, who took control in 1993. Under their ownership the brand has seen sales grow massively, especially within the last 10 years.
Our tasting notes
The colour is golden yellow and the nose is sweet and malty. There are aromas of toffee, butterscotch and golden syrup to begin with and these mingle with a robust cereal note, plus a whiff of soft peat smoke. Underneath are further aromas of green apple, cookie dough and white chocolate with pinches of cinnamon, cocoa and ginger powders.
On the palate this whisky initially feels quite sweet and sugary - think of the butterscotch and toffee note in particular from the nose, plus some brown sugar. The sweet characteristics are supported by green fruit, especially crisp apple and ripe pear, along with some dried fruit. We detected raisins, candied orange peel and sultanas. The sultana note developed even more with time. Then comes a savoury quality - this is led by the gentle earthy peat smoke and maltiness, although these cereals are less robust than on the nose. Everything is underpinned by a lovely set of warming wood spices (imagine cinnamon, all-spice and a pinch of nutmeg) and a hint of gingerbread and cocoa. A late hint of dried red apple rounds things off.
The finish is of decent length, thanks largely to the malt and spices. The sweet and fruit elements fade a little quickly, followed by the soft gentle peat smoke. The malted cereals and baking spices grip the tastebuds to give warmth and depth.
What's the verdict?
This is a pleasant and enjoyable whisky from Jura. It is not the most complicated, but sometimes you want that. The whisky does what it does well and has enough depth and character to maintain interest. The Winter Edition would be a great choice to give a whisky beginner so as to introduce them to the island or lightly smoky style of single malts. Simple but delicious.
posted by Matt C at 5:37 PM